The Kauri Coast to Coromandel Peninsula 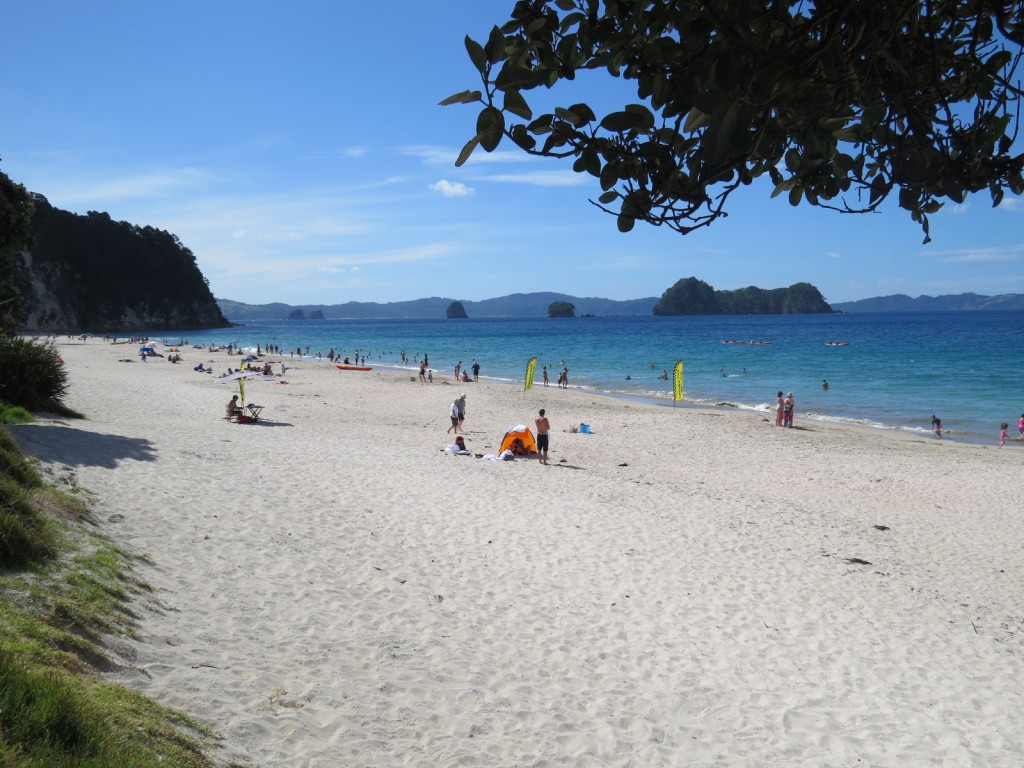 Finally, it was down south to the Kauri Coast where the enormous and beautiful kauri trees can be seen. Th 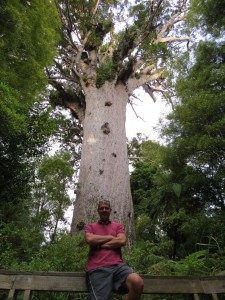 e road took us through many towns with the original wooden buildings still intact. We’ve heard people describe New Zealand as old fashioned or stuck in the 1950s, but frankly these towns are refreshing after the usual beachside resorts of the glass modern behemoths that we are more familiar with today.   After catching the Hokianga Car Ferry to Rawena we made it to the Waipoura Forest where you find the ‘Lord of the Forest ‘ Tane Mahuta, an enormous kauri tree that makes you go ‘wow’ when you see it and wow again when you realise it’s about 2000 years old!

We stayed here at the most beautiful caravan park called Top 10 Kauri Coast, with a river running through it that the boys could go rubber ringing down and swinging into from a Tarzan rope.  I did my fair share of bobbing around with my botto 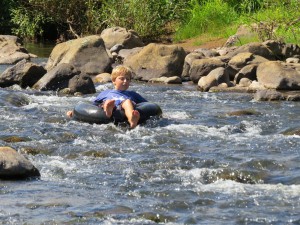 m wedged in an inner tube too. We’d booked a small cabin here to self-cater as we’ve found sticking to a budget here harder as overall costs are much higher in NZ, plus eating out isn’t good for wallets or waistlines!  The boys love staying in the parks too as there is space for them to explore and play or swim. 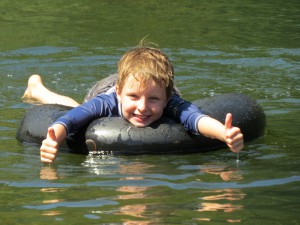 That night we went on a night walk in Trounson Kauri Park with Chris, our guide (and owner of the caravan park), to try to see the elusive and now endangered nocturnal Kiwi (sadly still elusive), but being in the forest at night was amazing, dotted glow-worms on the upturned tree roots and the lack of any light pollution making the 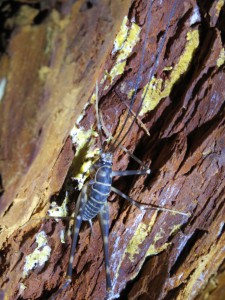 number of stars incredible.  Chris also pointed out the famous Weta (or large bug) Long-Fin Eels (which grow up to 2 metres) and possums, which are unfortunately a predator of the poor flightless Kiwi, but are affectionately known to locals as “squash-ums” due to their frequent appearance as road-kill.

To understand the importance of the Kauri to NZ’s history, we visited the superb Kauri Museum in Matakohe, and it’s incredible collection of gum (or sap) collected for jewelry and decoration, and the gum-digger and timber logging industries. On our scenic drive further south, we spotted some amazing landscape–sized sculptures on land that Google later revealed to be owned by a Kiwi entrepreneur called Gibbs.   It turns out that his house is worth around $400 million and each year he commissions a piece from internationally renowned artists including Anish Kapoor.   Hopefully, one day he will allow the public to view these amazing creations. (Google GibbsFarm for more info) 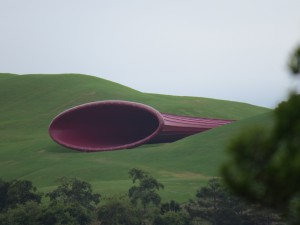 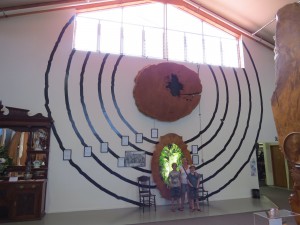 The Coromandel Peninsula is east of Auckland, and was highly recommended to us by many Kiwi’s. Here, the road literally hugs the blue-water coastline and made for a beautiful drive up to Coromandel Town, stopping off at The Mussel Kitchen for an amazing dinner of fresh pots of mussels on the way. It was from here that we intended to drive as far north as the road would allow, as much of it is still dirt. We took our swimmers and fishing rods too and ended up as far as Colville where the unpaved road was too much for our Nissan Tilda hire car! Luckily we found a lovely beach here but not many fish! 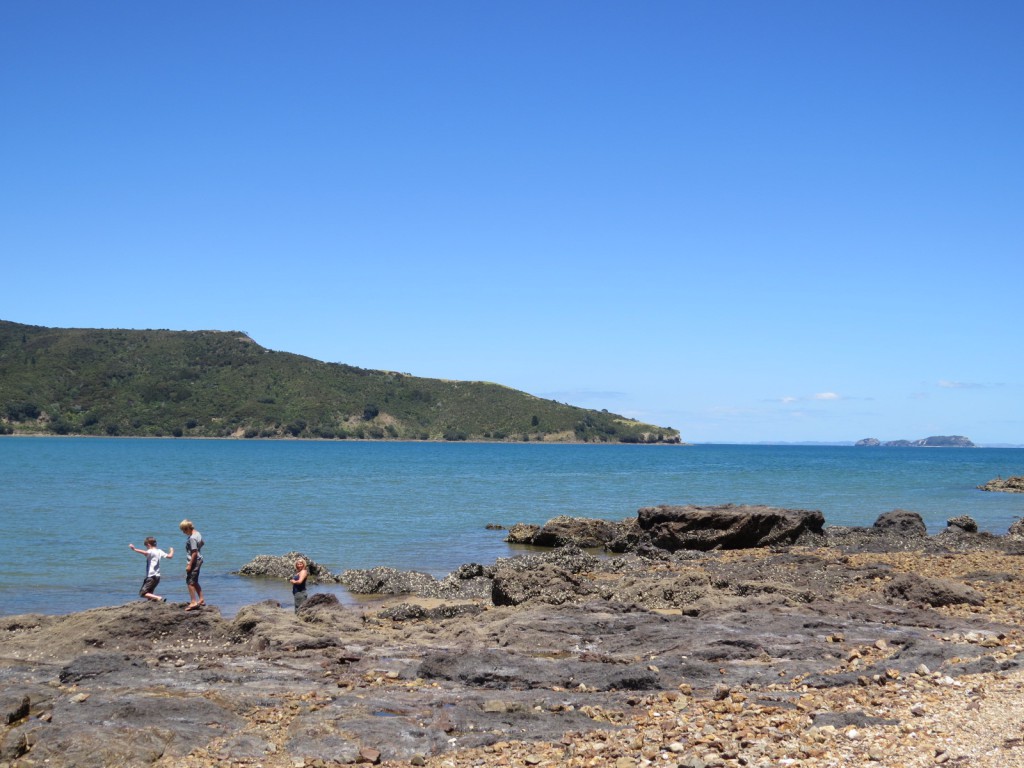 The seaside town of Whitianga was the next destination and took us on more twisty roads through beautiful sliver fern forests back to the coast. Our accommodation here was the delicious sounding Chocolate Box, the former holiday house of a lovely retired couple living next door. We had already booked to do a morning Sea-Kayaking from Hahei Beach to the fa 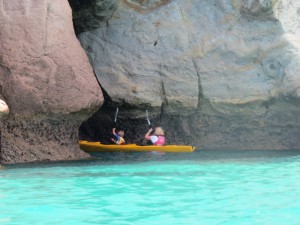 mous Cathedral Cove to see the sea carved rock arches, caves & Te HoHo rock in Mercury Bay. The weather was fantastic and the water calm and this made paddling the two-person kayaks around the coastline a littl 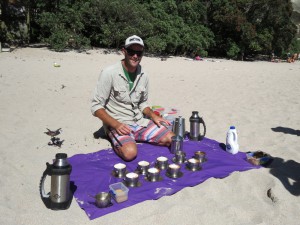 e easier. The water was also very clear, and as you paddle through a underwater nature reserve you can see deep below. We got to the stunning cove and our guide Terrell unpacked his boat and made us all a coffee or hot chocolate to enjoy on the beach. A rock formation sat just off the beach and never one to walk away from a challenge, Ben & Cameron swam out to climb it and of course jump off! Ollie and I were happy to snorkel and fish watch instead. Cameron now judges any “jump off” against his inaugural cliff jump at Crater Lake in Oregon back in September!! 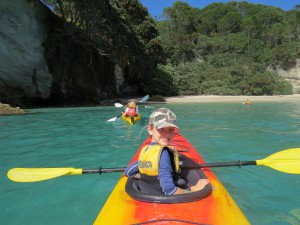 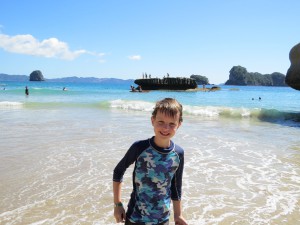 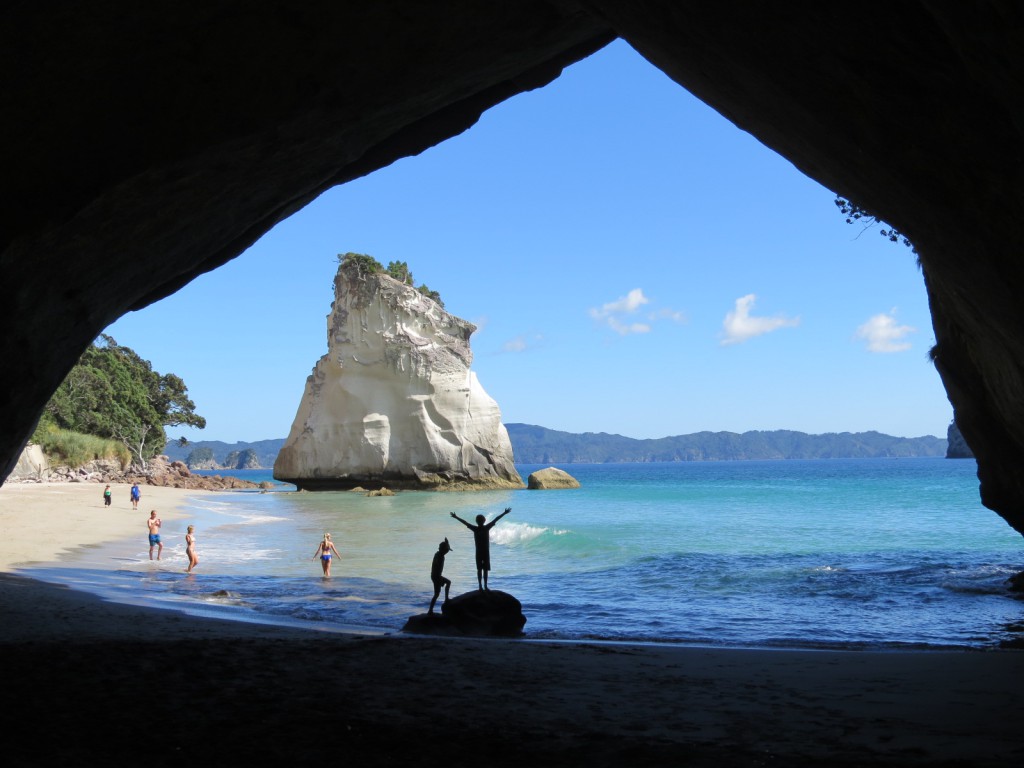 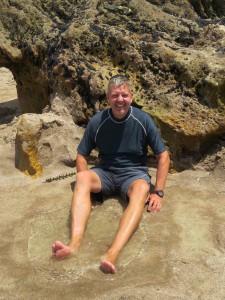 After resting our weary arms from the return trip we headed off to Hot Water Beach to catch the necessary low tide for a place the Lonely Planet (our travel bible) featured in its Top 10 Beaches, a beach above a hot spring that bubbles up through the sand. Here you can dig your own spa bath! We were all quite keen to see it, but here we had finally we found out where all the New Zealanders actually are – sitting in a puddle of really HOT water on this beach.   In fact in places the sand was steaming and practically scalded your feet. There were lots of “owww..oww…oww” as people ran into the sea to cool off hot toes. The only other downside to Kiwi beaches are the resident sandflies. If you have ever had the misfortune you will know they are the ‘bite that keeps on giving’ as they drive you crazy by still itching weeks later – argh! 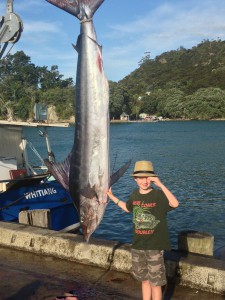 Tomorrow we finally get to the part of New Zealand that they boys have been looking forward to most – Hobbiton, or to those who don’t know it, the place where they filmed scenes for the Lord of the Rings and more recently The Hobbit movie trilogies.   The director Peter Jackson use of the spectacular New Zealand landscape has boosted the tourist economy here and even our road map includes references to places used in the movies!

4 Responses to The Kauri Coast to Coromandel Peninsula