Scuba, Steinlagers and Toilets: The Bay of Islands to Cape Reinga

Our first destination out of Auckland up the main (and almost only) road north was to Whangarei, where we took a little detour across to Whangarei Heads.  Here the road winds around bay after bay of lovely little hamlets of ‘bachs’ (what they call holiday homes here in NZ), with beautiful blue waters and small beaches. We ended up driving to Ocean Beach where they was a surfing competition taking place, and it was so beautiful we stayed for a look and then a swim. Even with the competition going the beach was still nearly empty, particularly in UK terms! After drying off and a quick stop for “fush and chups” (in our best Kiwi accents of course) we got back on the road towards Paihia, a small holiday town in the Bay of Islands. 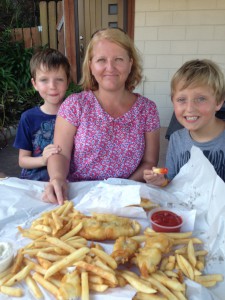 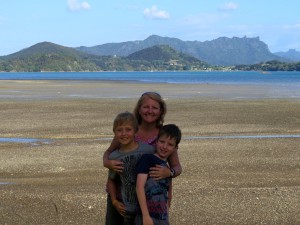 The Bay of Islands, located north-east of Auckland, is famous for its beauty and abundant sea-life and where was our first stop? Kawakawa, which is famous for it’s public toilet – it is very unusual, with a tree growing through it’s roof, covered in mosaic tiles and designed by a famous Austrian architect Hundertwasser– so we had to go, and go, of course! 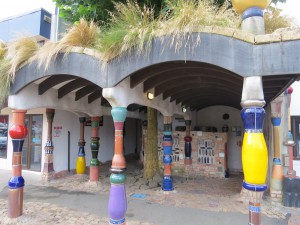 From here it was a quick trip to Pahia, which we thought would be a good place to ‘do’ the Islands.   It was also a bit cheaper than Russell, it’s slightly upmarket cousin across the bay. Accommodation here in NZ is a bit more expensive generally than South America and we have to look much harder to find places in our under £100 a night budget (our South American budget was under £70 per night). We figure that this is a country of ‘activities’ that we would rather spend our money on, so a good option here for us is motels. At Pahia we got a great room at the Kingsgate Motel, located with fantastic views into the Bay, lovely swimming pool and even a games room for the boys. 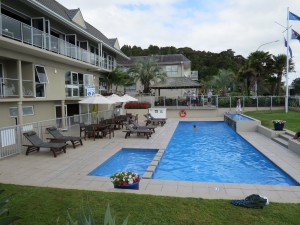 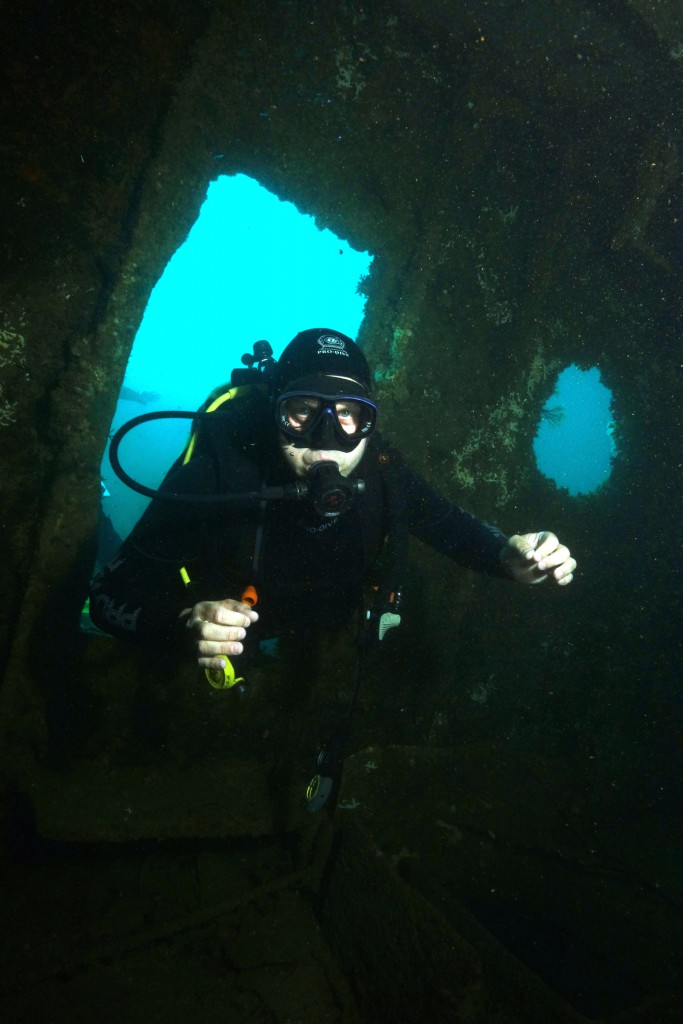 The next day was Ben’s scuba diving expedition out to the wreck of the former Greenpeace Ship The Rainbow Warrior – those of you old enough might remember that it was bombed in Auckland Harbour in 1985 and a photographer was killed – later to be revealed by the French secret service – and was fittingly towed out and re-sunk near the Cavalli Islands to create a man-made reef. This is his description “Despite only being sunk in 2007, the wreck is teeming with life.  It’s quite eerie diving through the hull of the ship and seeing the place where the Greenpeace members were sitting when the bomb went off!  Sadly, the dive was quite short, at around 32 minutes, because the bottom of the wreck is at 27 metres but it’s a great dive and the Craig, the owner of Dive Pahia, runs a great operation.”

Our friends the Dishmans ar 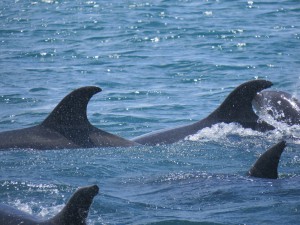 rived that night, only to find they were in the room next door again! Spooky! We had booked the next day to do a small Dolphin Eco Boat trip to see local bottlenose dolphin pods in their natural environment and hopefully get to swim with them. Alas, we weren’t able to get in the water because the pod we that we saw had juvenile’s with it (so against the law) but they were bow-riding close enough to spray us purposely with water on the boat. A very small baby dolphin was also in a very playful mood, leaping and splashing around showing off his newly discovered acrobatic skills (but sadly too fast to photograph!)  The pod was quite large and we were lucky to see so many at once up close. It was also a great chance to see the beautiful islands, and swim in some of the sheltered coves. Other highlights of Paihia for us were eating seafood & drinking cold Steinlagers while watching the boys beach-combing and rock pool crab hunting, bliss!. 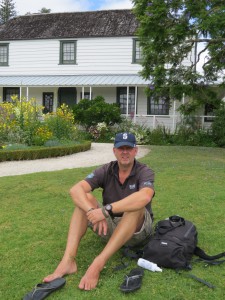 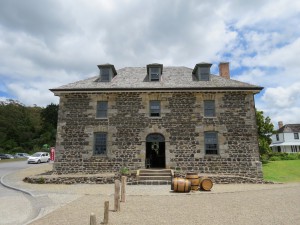 Our next pitstop on the way to the tip of NZ  was Kerikeri, an old missionary town and Maori ‘pa’ (fort).   However, it was soon obvious that this place was special, having the oldest stone building in NZ, an old (but still 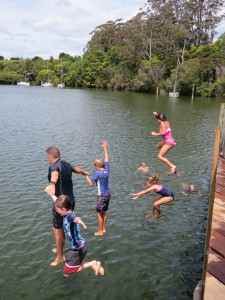 in use) trading store and the original mission house from the late 19th century which is now a living museum. The tour and museum were brilliant for learning about the European and Maori interaction (and clash of cultures), the work of the early Christian missionaries and the “musket wars’ in the region. It was great to see the boys so interested and asking loads of questions. So that’s history covered today!   As a reward they spent the next two hours jumping off the jetty with other local kids.  As you can see Ben was right in the middle of the action.

Dragging ourselves away we followed the coastline past the also gorgeous Doubtless Bay (named because Captain Cook wrote it was “doubtless a bay”). We decided to stay about half-way up the peninsula at the Pukenui Motel & Backpackers, another lovely small unit with amazing views and a great jetty to fish from. Ollie has become fi 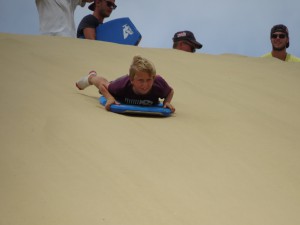 shing obsessed since getting his rod in Chile. So he and Ben spent quite a bit of time morning and evening trying to land a ‘big one’, a snapper preferably, but typically returned full of stories of the one that got away, so it was pasta for dinner instead!.

This area is also famous for it’s enormous sand-dunes and here sand surfing is the thing to do. I was official photographer while all three boys climbed the huge dunes over foot-blistering hot sand to come back down on boogie boards at high speed! Awesome – as Cameron put it! 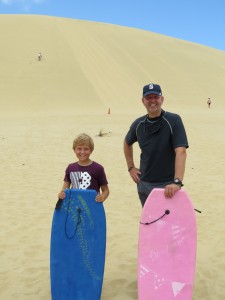 nd out of all sorts of places we finally headed north to Cape Reinga and a walk to the lighthouse. This is one of the most sacred Maori places, where they believe all Maori souls go before heading back to the motherland in Hawaikki. It is also the place where the Tasman Sea meets the Pacific Ocean.   To make sure the boys got their daily dose of water we went for a late swim and boogie boarding at Rarawa Beach before heading back to the motel. 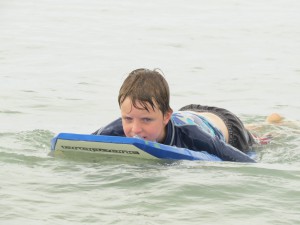 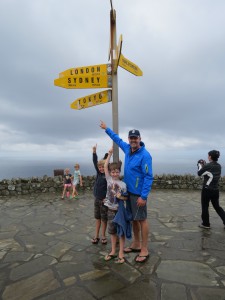 On our way back down the peninsula we stopped off at 90 Mile Beach which is literally the biggest beach you can imagine with about 10 people on it! Gotta love the small population here! This is where you find ‘sandies’ or mussels in their millions just under the surface of the sand. Unfortunately, we had a long car journey ahead of us, but the other couple on the beach we taking away bucket loads of them for lunch! Can’t tell you, as shellfish addicts, how hard it was to walk away empty handed!! Other great sounding beach names followed with a our final swim of the day at Shipwreck Bay before heading south. 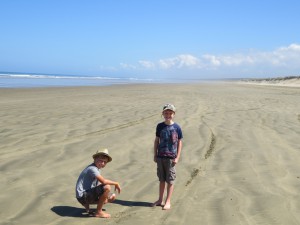 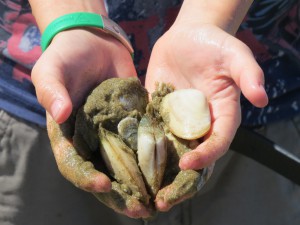 2 Responses to Scuba, Steinlagers and Toilets: The Bay of Islands to Cape Reinga