Laos, land of a million elephants. 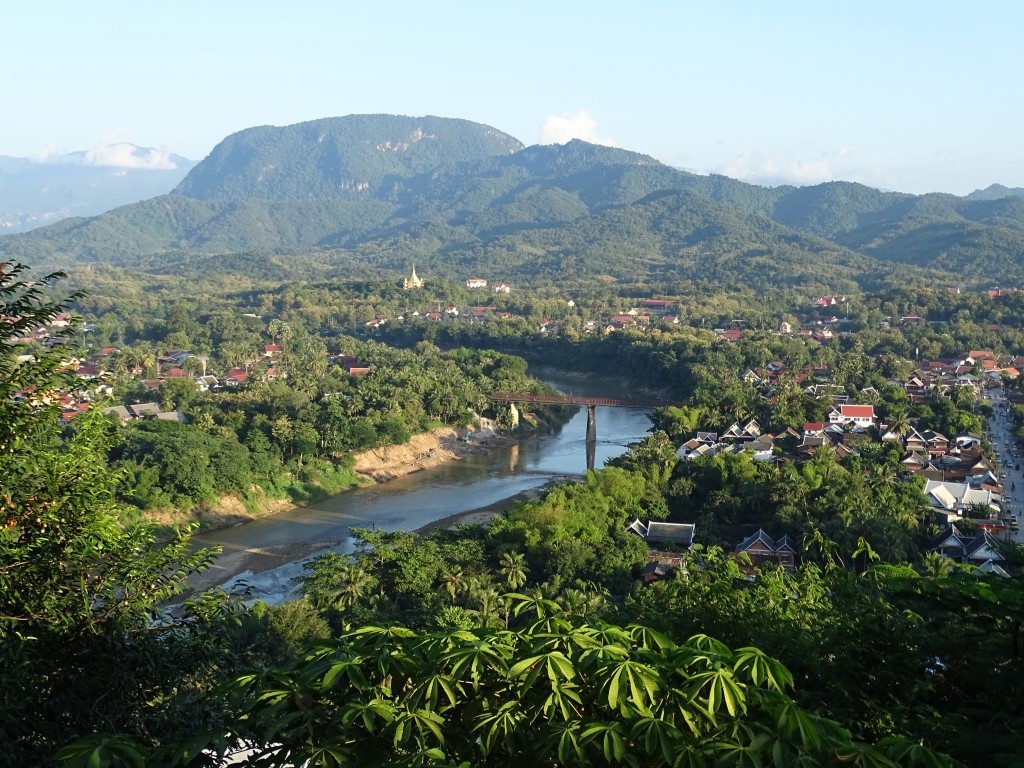 Today we arrived in Laos, marking another ‘new’ country for us.  But it also marked a moment when we could actually measure the impact that travelling has had on the boys when the first thing they asked our airport taxi driver was how to say hello and thank you in his language. Both boys now take new countries and new cultures in their stride, determined to be able to speak at least a little of the local language, and develop some understanding of the culture they are in. And here in Laos we saw that in action at a charitable organisation called Big Brother Mouse in the City of Luang Prabang. It is aimed at helping young Laos people to learn to read, but also as a venue where tourists can help teenagers to practise their English. The boys wanted to help, and so we sat chatting with students in their early twenties who asked us to explain quite challenging aspects of English vocabulary to them. I must say that I was struggling to explain the difference between a tournament and a championship, myself. But we listened in awe, and a huge amount of pride, as the boys patiently and confidently came up with clever and imaginative examples to help the students learn.

Luang Prabang itself held further surprises.  We didn’t have time to do a lot of research on this destination, and so were delighted to find ourselves in such a beautiful and intriguing city.  It is actually more like a large town, located on a stunning peninsula surrounded by the Mekong and Nam Khan Rivers, with intermingled streets of French colonial architecture and golden Buddhist temples.  It’s quite beautiful. 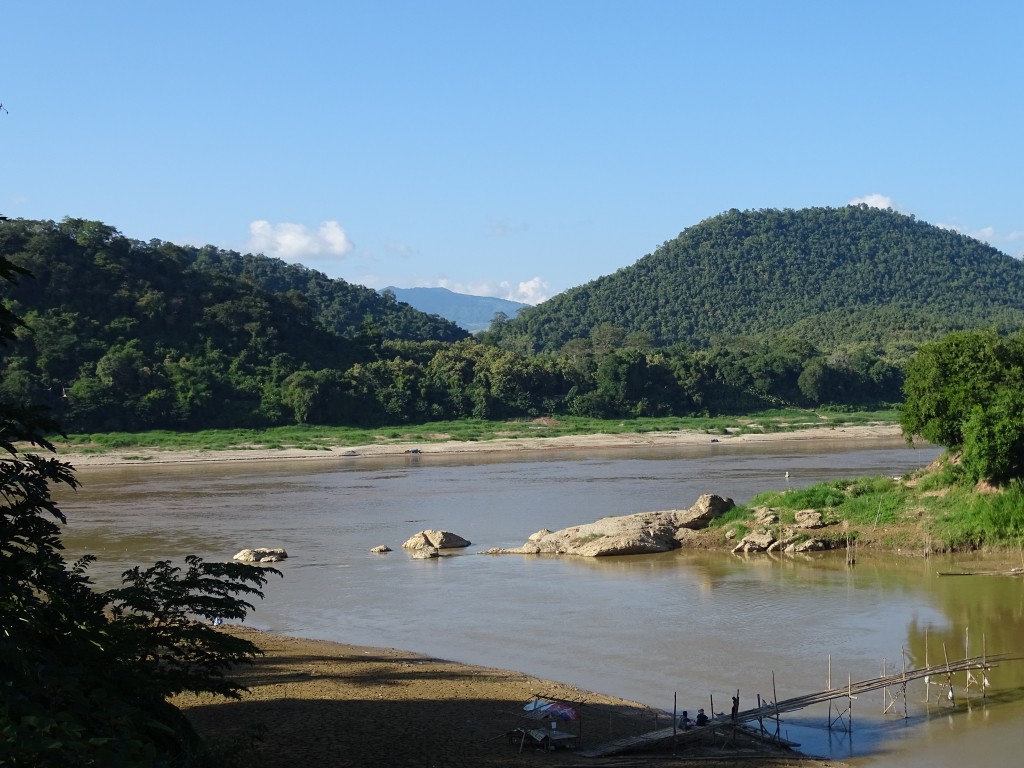 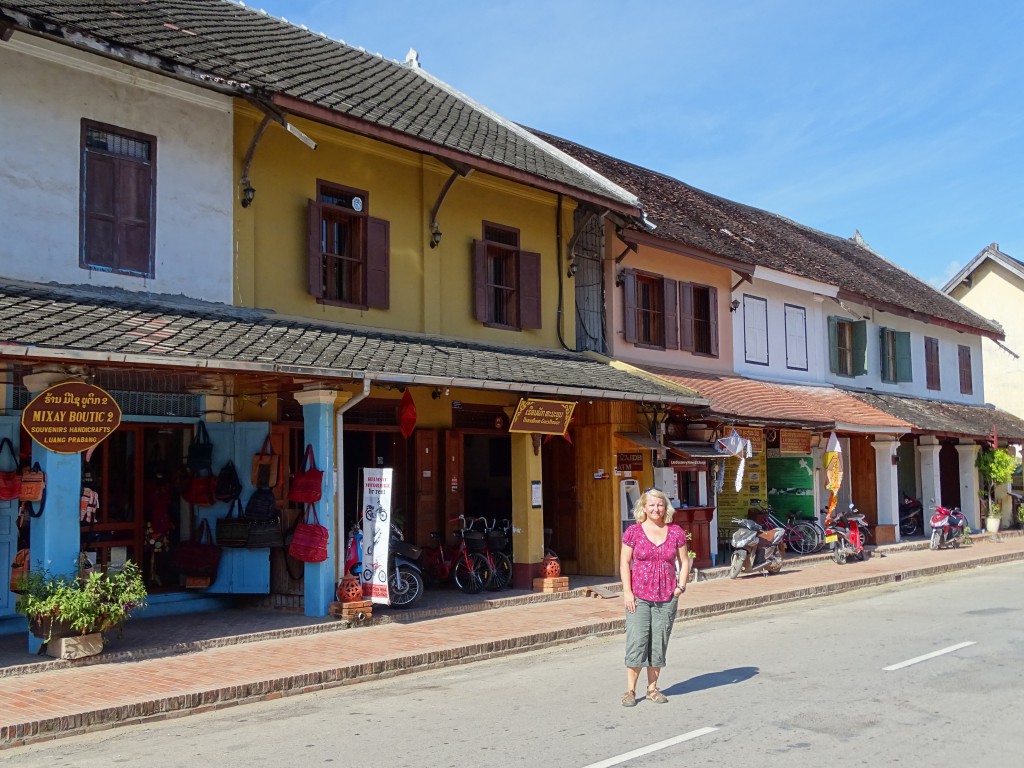 Luang Prabang is also well known for the Monks Almsgiving ceremonies that take place here each morning around 5.30am, when a few hundred monks from the local temples walk along the streets to silently receive alms or ‘food’ from the locals, and some tourists, for their meals. It is a simple and humbling event to watch, however, (and we had read about this there beforehand) some tourists are really disrespectful, putting flashing cameras into the monks faces, or putting pre-packaged foods into the monks bowls (which they cannot eat),  Strangely, it seems to be mainly Asian tourists that behave this way, and some of the people selling the inedible food are local Laos.  So take from that what you will.  We watched the ceremony from a good distance on one of the side streets, and were rewarded for our respectful behaviour by getting a ‘good morning’ from the head monks, and one even came over to give the boys some of the crisps and jellies he had received in his bowl. 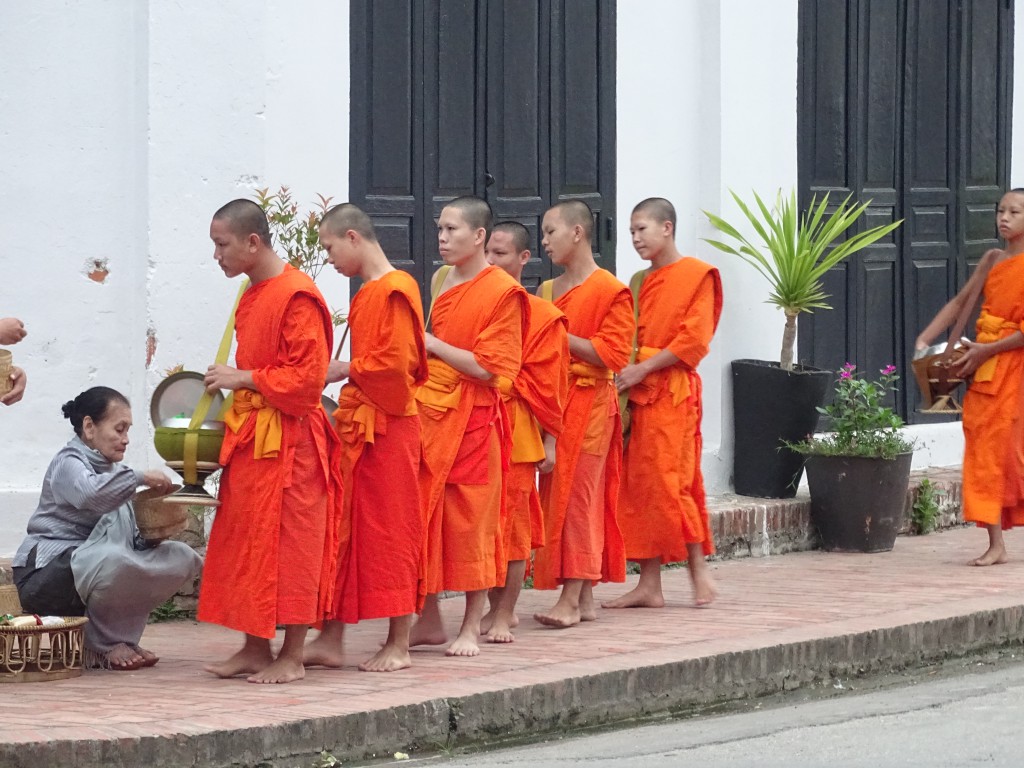 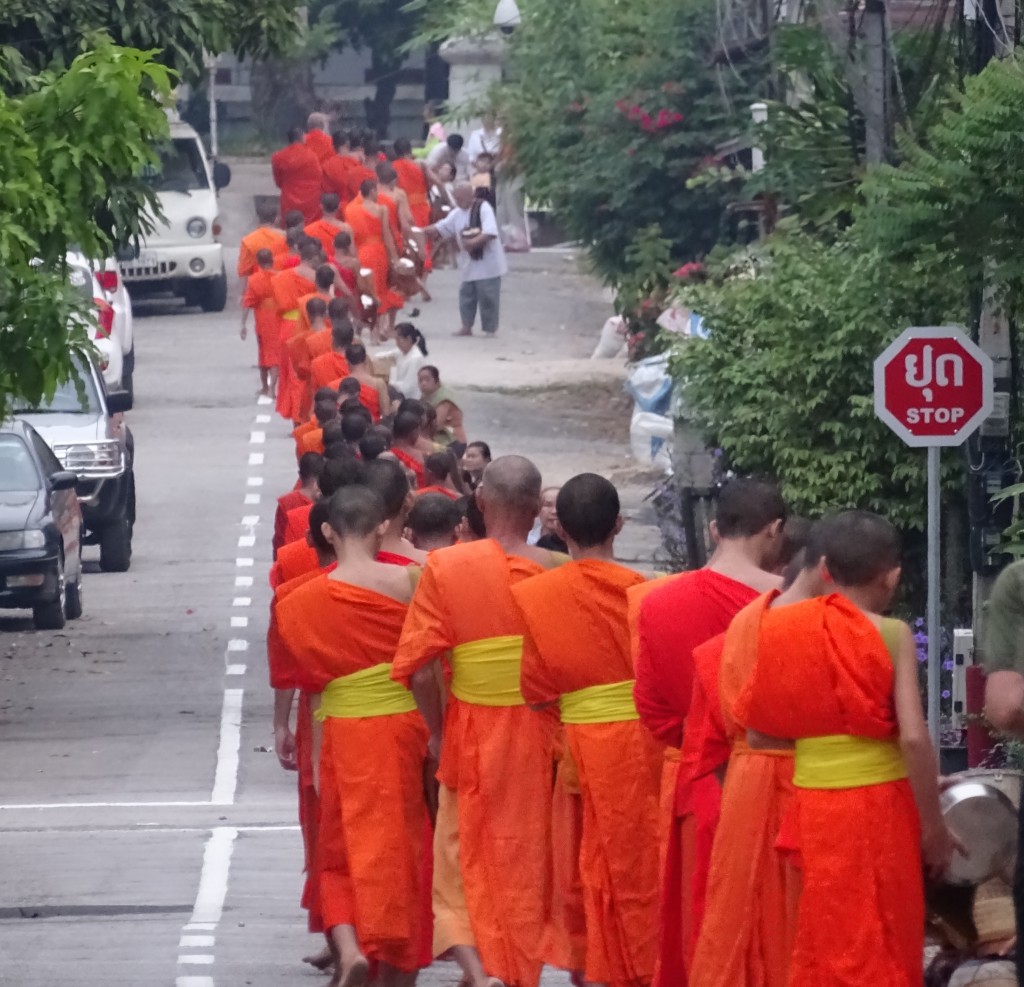 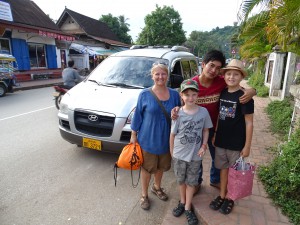 Monks here seem to be a very important part of the Laos culture.  We were fortunate to be able to spend a day with Liam, who we hired to be our guide for a day, and who had also spent 10 years as a monk in one of the local temples.  He was more than happy to talk about his life as a monk.  He left his village home at 13, as he did not want a life of early marriage and farm work ahead of him, so he came to Luang Prabang and went around the temples until one agreed to take him on as an apprentice, and in return for daily devotions and an ascetic life, he would gain a free education.  He told us about a holy festival where all the monks have to sleep in the forest surrounding the Peacefulness Temple for 15 nights (with no tents!) and only eat once a day. Can’t imagine Cam & Ollie doing that!  For many boys however, this is the only chance to get an education, although there is unfortunately not yet an option for the girls of poorer families.  They are more often taught a trade such as weaving or paper-making that allows them to make a living.  Despite the glamour of the French influence here, this is a still a very poor country and many of the young people we met came from villages with little infrastructure such as no electricity or proper roads. 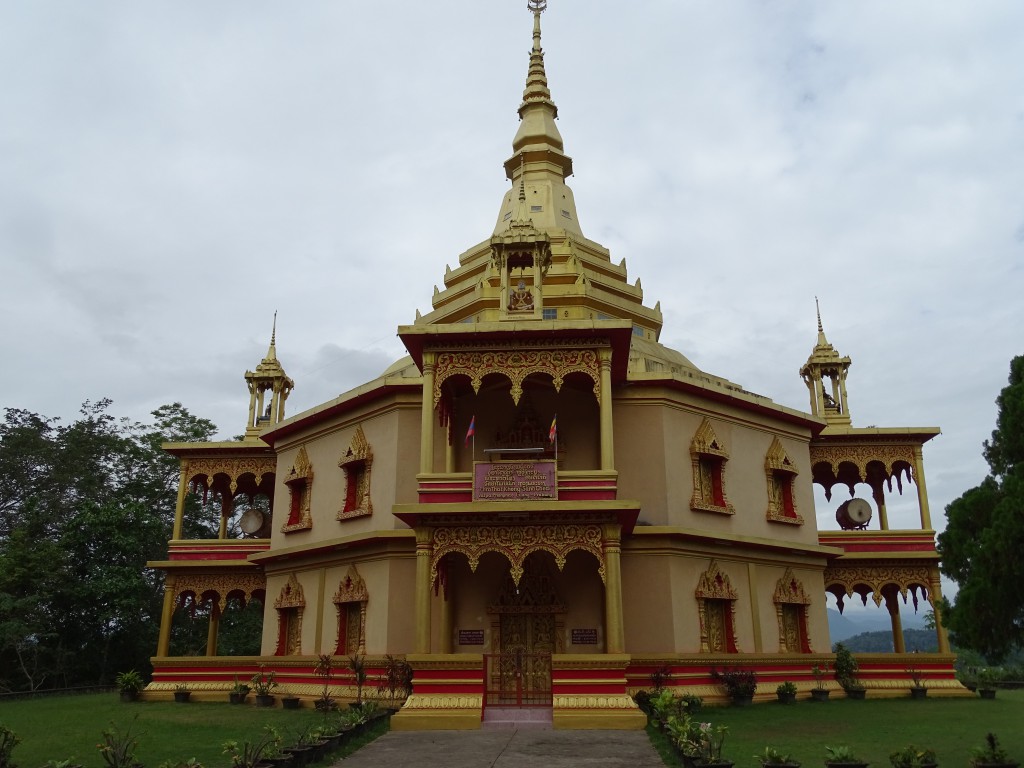 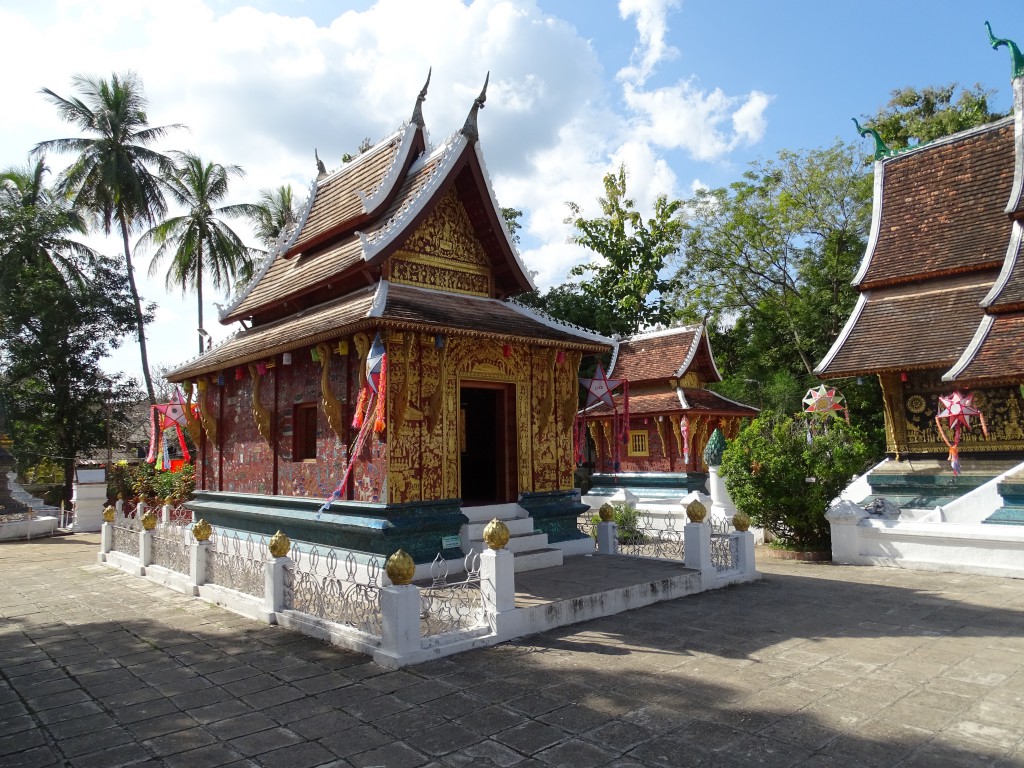 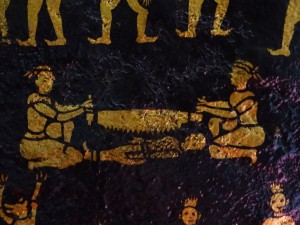 You really don’t want to be naughty here! 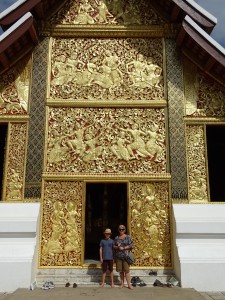 The temples here are different to those we’ve already visited, with the local style being more vibrant and colourful.  The outsides are painted in red with bright glass mosaics and the inside in in dramatic black with gold stencilling.  The boys particularly enjoyed the graphic depictions of “hell” that they found. 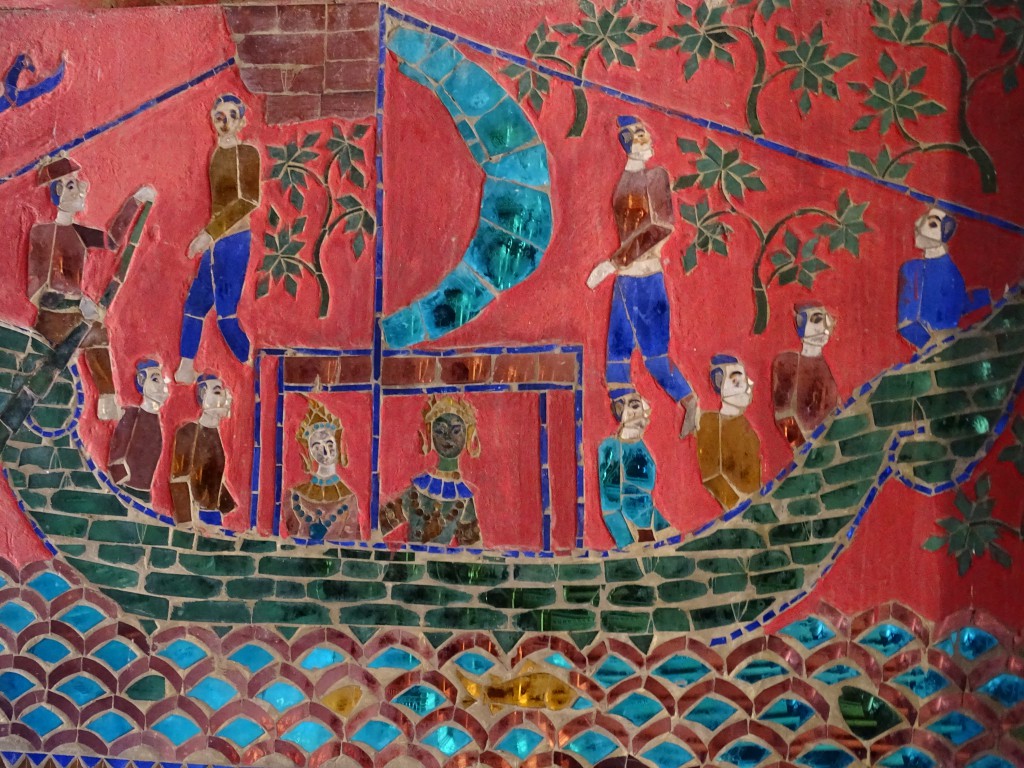 As we’ve remarked before, it’s the people that make a place, and just from striking up conversations you can find out the most interesting things.  The boys went on a play date with the children of the managers of our guesthouse, who were two Aussie and American families.  The boys got to have some quality Lego time, while also finding out about what it’s like to be expats living in Laos.   While Ben & I heard all about their new venture to start the first cheese & yoghurt dairy in Laos using the local water buffalo.  We also shared a tuk-tuk to the Kwangsi Waterfalls with Aiden, an Irish gent, who is also a UN elections monitor when he’s not travelling for fun.  An ex-Aussie restauranteur who now cooks vegetarian food in a monastery in Cambodia, and a retired grandmother who does incredible voluntary work all around the world because she wants to be useful in her retirement. We met her at the new Kwangsi Falls Butterfly farm, opened by a Dutch couple who themselves had recently sold everything in Holland to start a new life in the Laos mountains!  Really inspiring people! 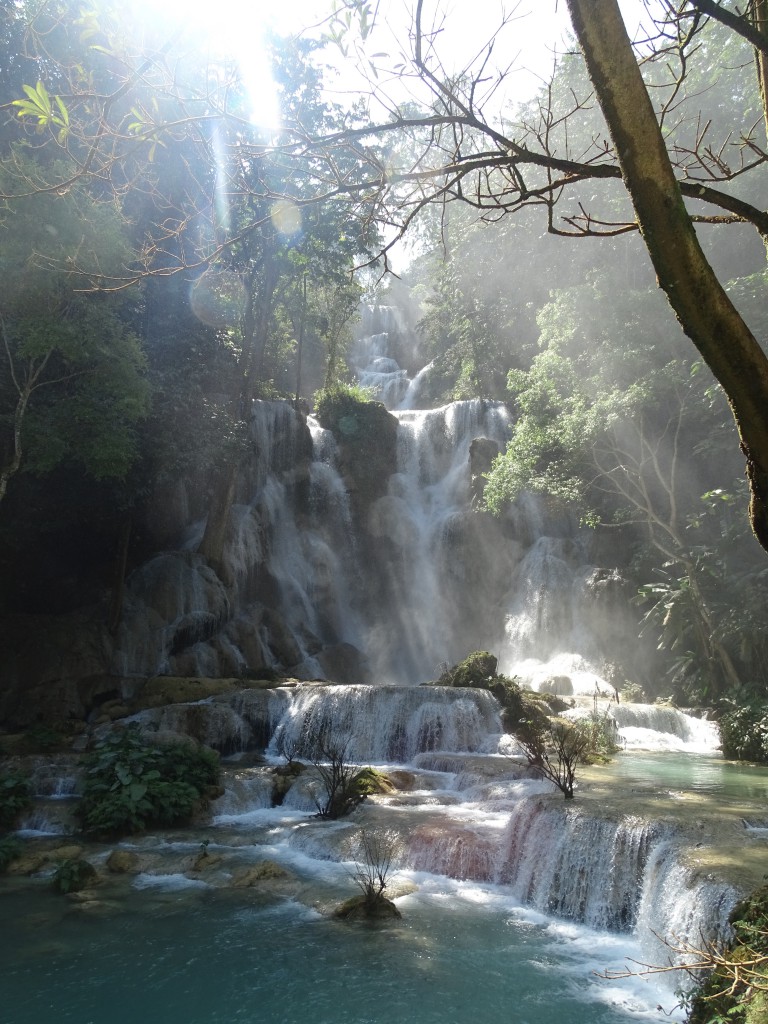 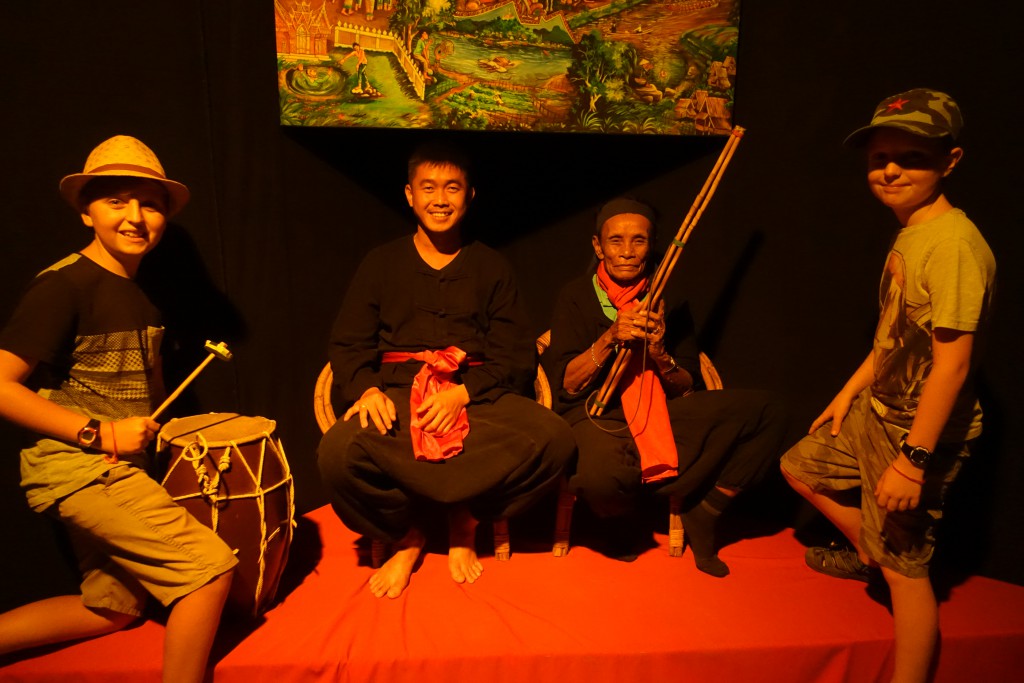 We also went one evening to see some traditional Laos storytelling.  It was full of funny and interesting local myths, accompanied by drum and the ‘khane’, a t 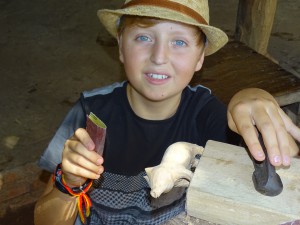 raditional wind instrument made from bamboo.  To complete our arts curriculum we signed the boys up for wood-carving day with a great initiative called BackStreet Academy.  Here they offer day programmes to learn local arts and crafts with skilled local artisans.  The boys spent the day with a master-craftsman making a wooden elephant and a pig, using traditional tools.  It was really hard work, but they came away with some fantastic souvenirs and an appreciation for the level of skill needed to work with wood. 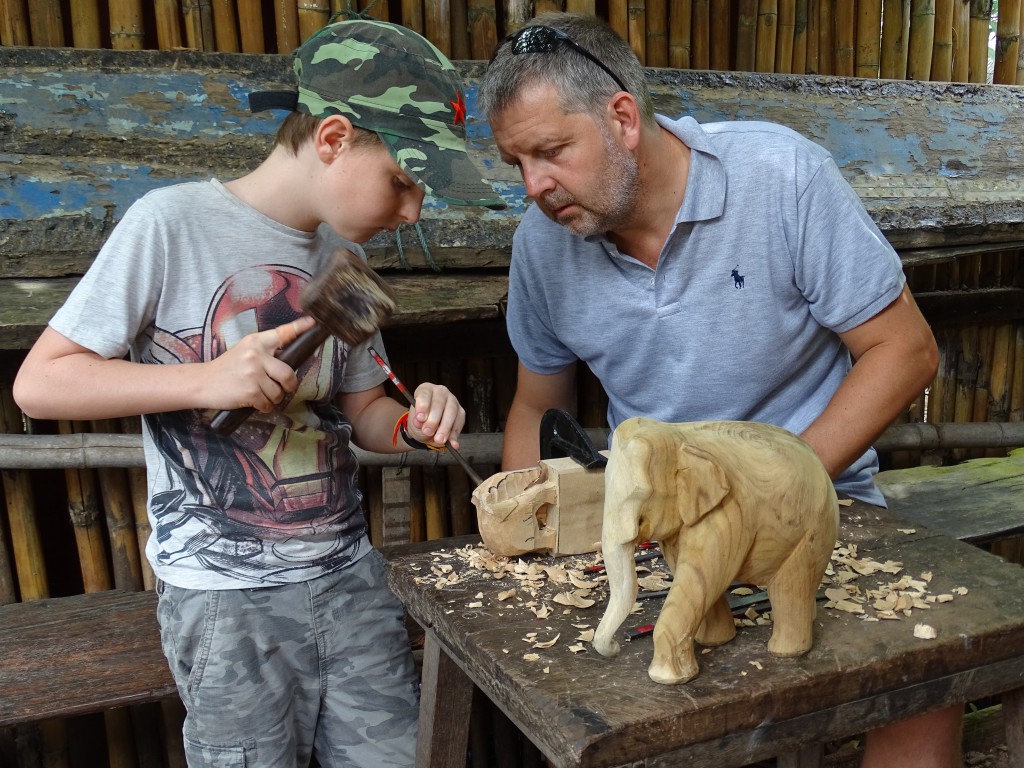 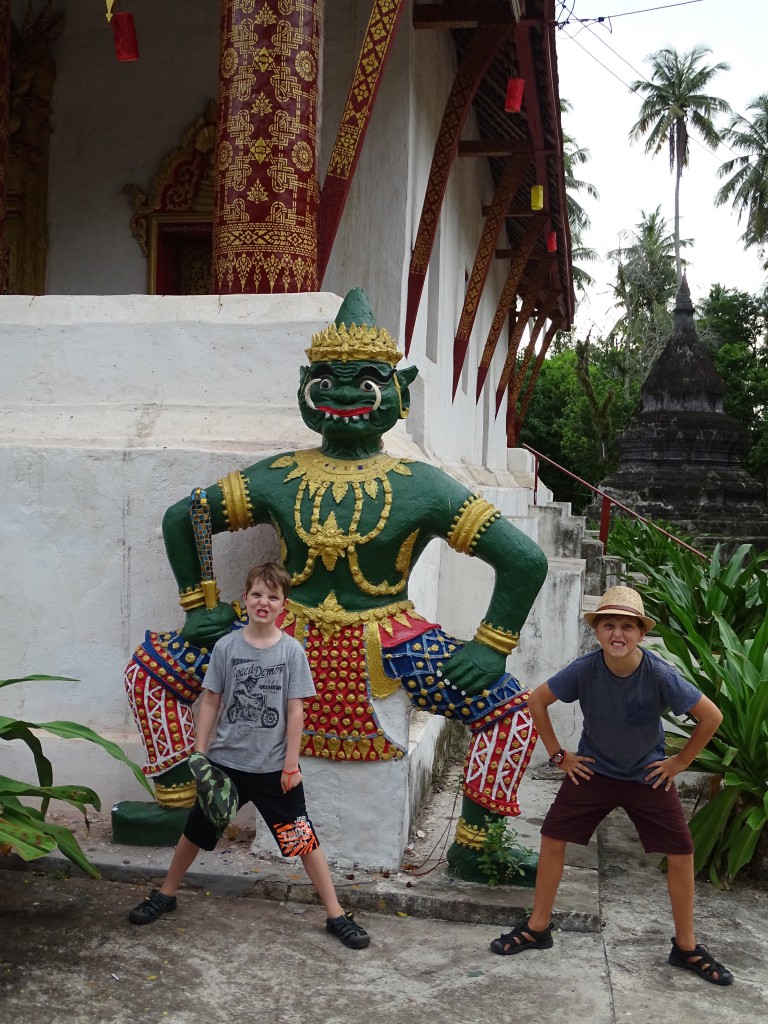 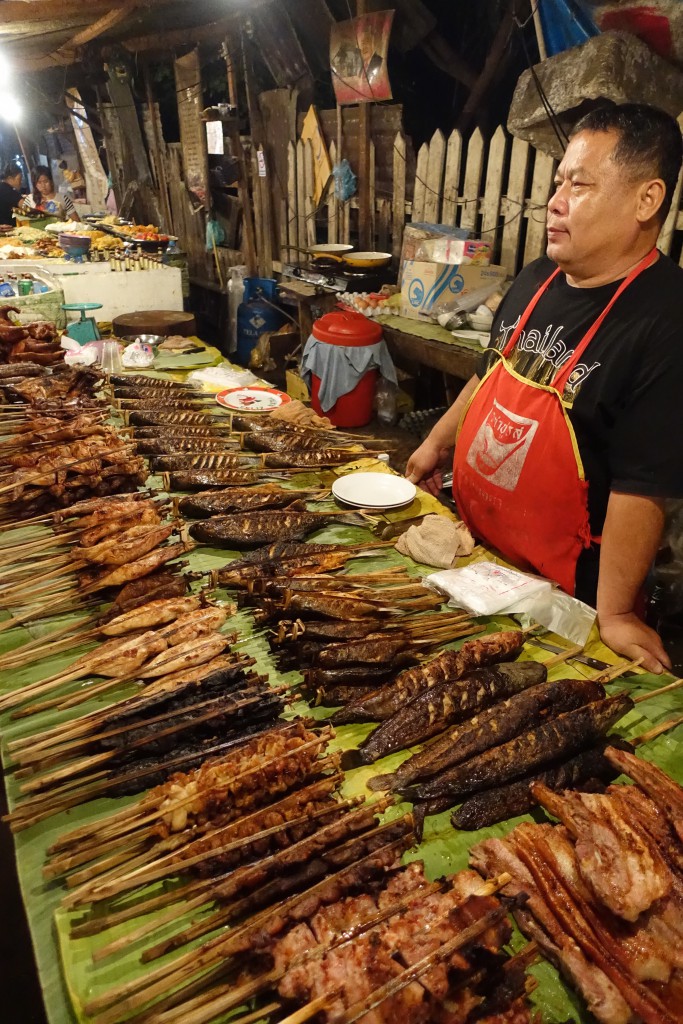 We only had time for a short visit to Laos, and we would love to visit again and explore more of the mountainous countryside.  Although the sheer number of UXO or Unexploded Ordinance here in Laos, particularly in the countryside, is hindering development of trekking here as a tourist pastime.  Approximately 2 million tonnes of bombs were dropped on Laos during the Vietnam War, and 30% remains unexploded and still active. 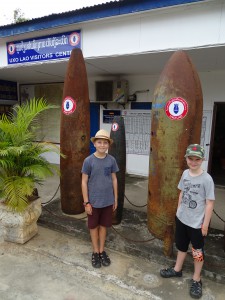 Dangerous and expensive work to remove these UXOs is being carried out, but still people are maimed and injured across South East Asia every day, with children often being the innocent victims, as they are curious and pick them up.

But don’t let me put you off, it’s a fascinating, beautiful country and well worth a visit before tourism changes it too much.  Plus, I think there are only about 900 elephants left. 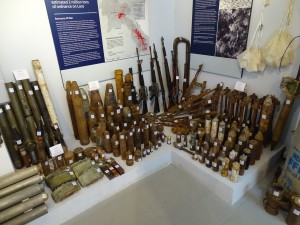 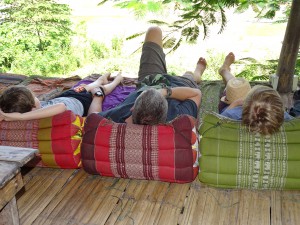 The Utopia bar – where you are encouraged to have a nap! 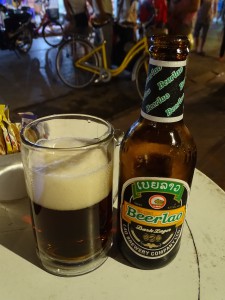 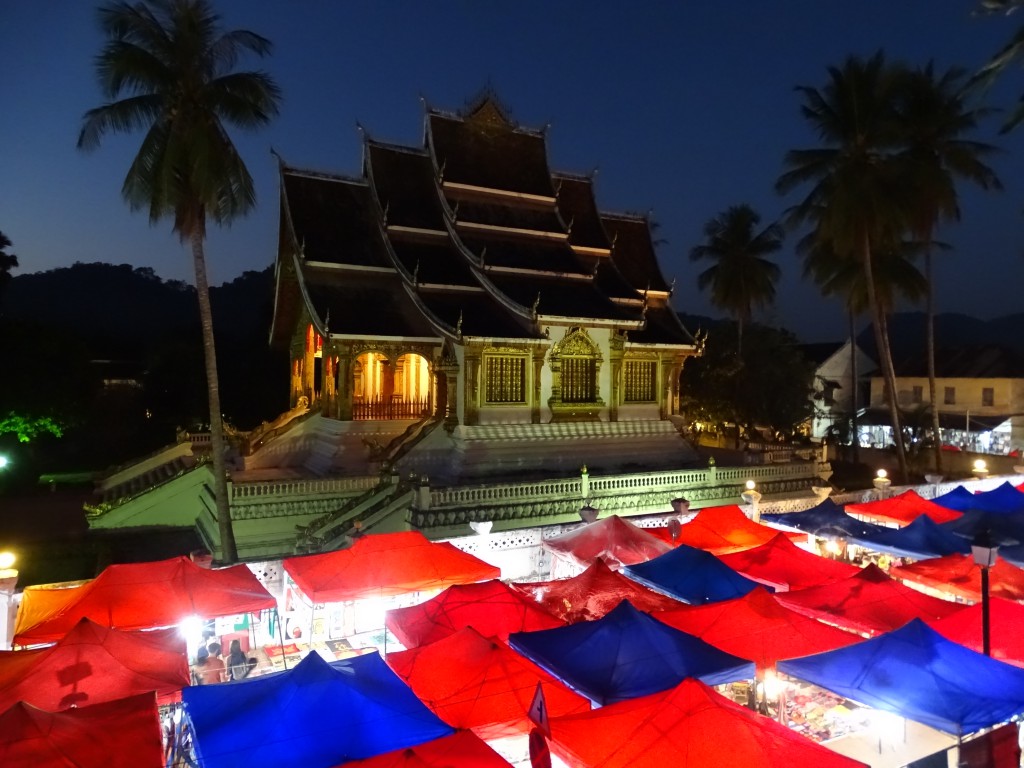 5 Responses to Laos, land of a million elephants.