Glow-worms at Waitomo to Zorbing in Rotorua 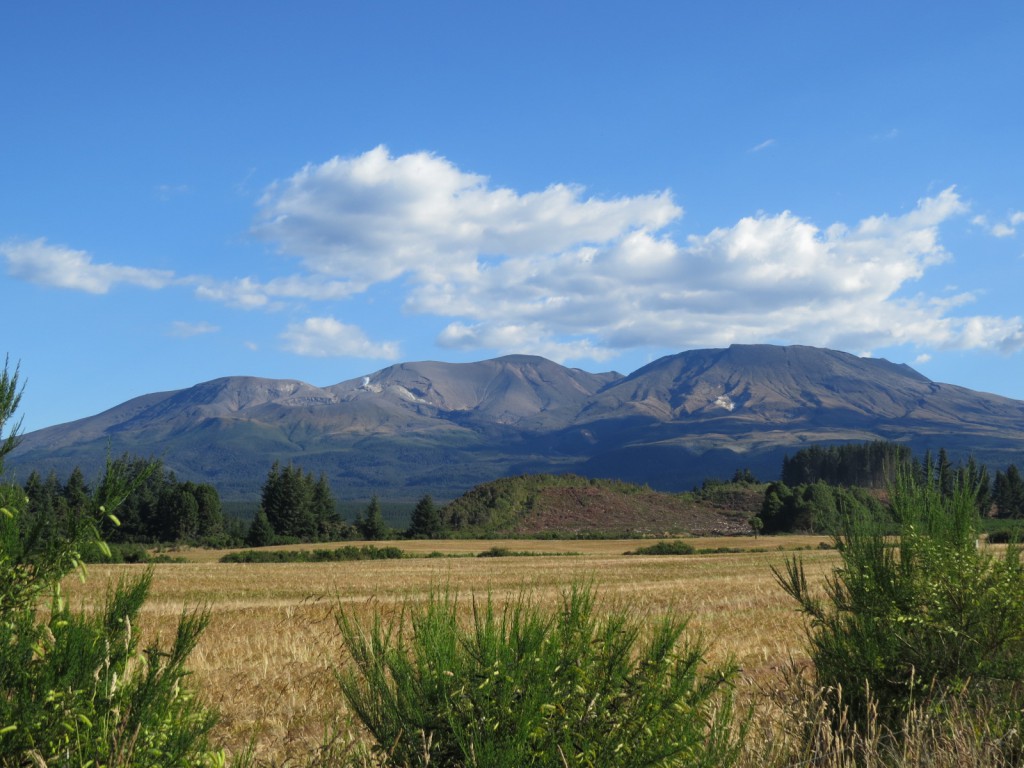 We’ve seen a lot now…so many things in fact that we need this blog to look back on to keep it all straight in our minds! It’s hard to believe that it’s been 5 months since Ben, Dan & the boys left for Vancouver (and 4 for me). 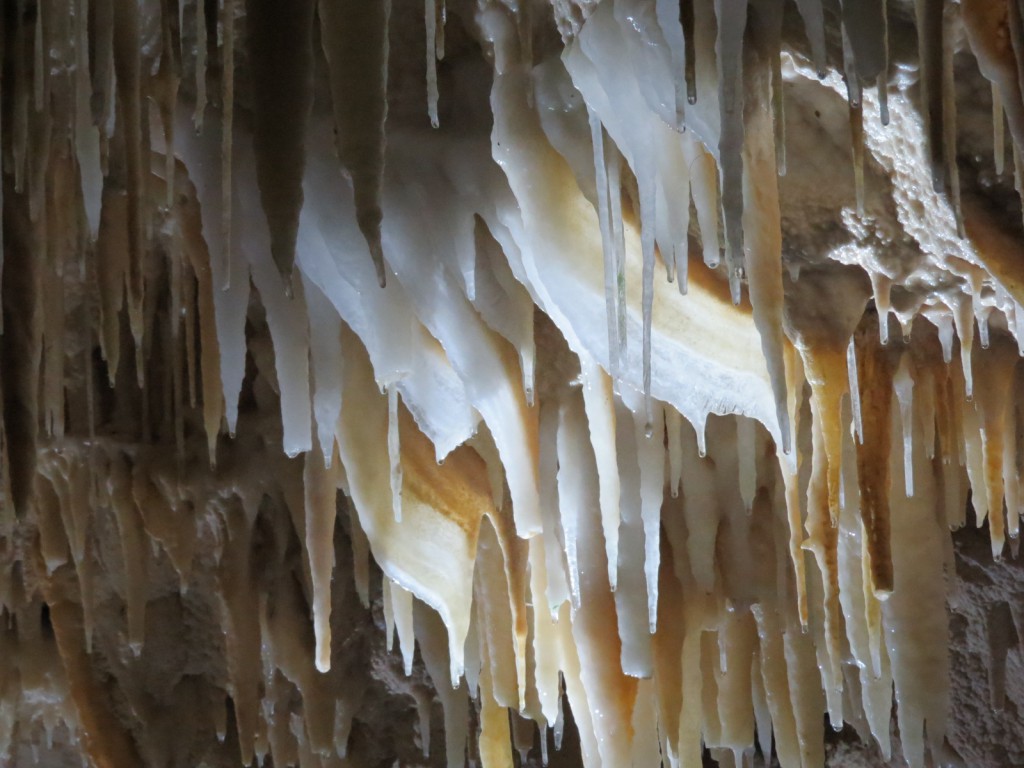 One thing I hope we don’t forget too soon was Waitomo Caves. In Maori wai means water and tomo, hole.   We decided to buy a pass to see all three caves in one day because each one is very different. Aranui Cave was first, and luckily it was a ‘private tour’ (by accident of course) and it was incredible. From the moment we entered it was a feast of large stalactites, and each turn took us into more caves of incredible formations that are quite hard to describe and even more difficult to capture on film.   The boys favourite was one that looked just like a witch and mine was a river of pure white that seemed to pour down the cave wall. 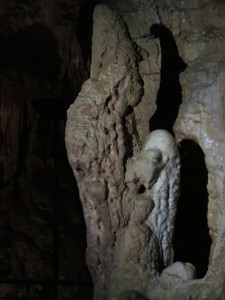 Second was Ruakari Cave where you enter via a new man-made entrance built specifically to bypass a Maori grave site. To impress visitors, there is a 50 ft deep winding spiral shaft that looks like something the Doctor Who team might have dreamt up. As you enter you are asked to spiritually cleanse your hands under spring water running onto a rock in the centre- very atmospheric. This is also the cave where the Blackwater Rafting takes place, basically rubber ringing through the underwater river in the dark (too scary for us – although Ben remembers doing it on his last gap year). Last, but not least, was the Glow-Worm Cave that included a dark underground boat trip to see the tens of thousands of glow-worms that form a dazzling milky way on the ceiling of the cave. Awed silence. 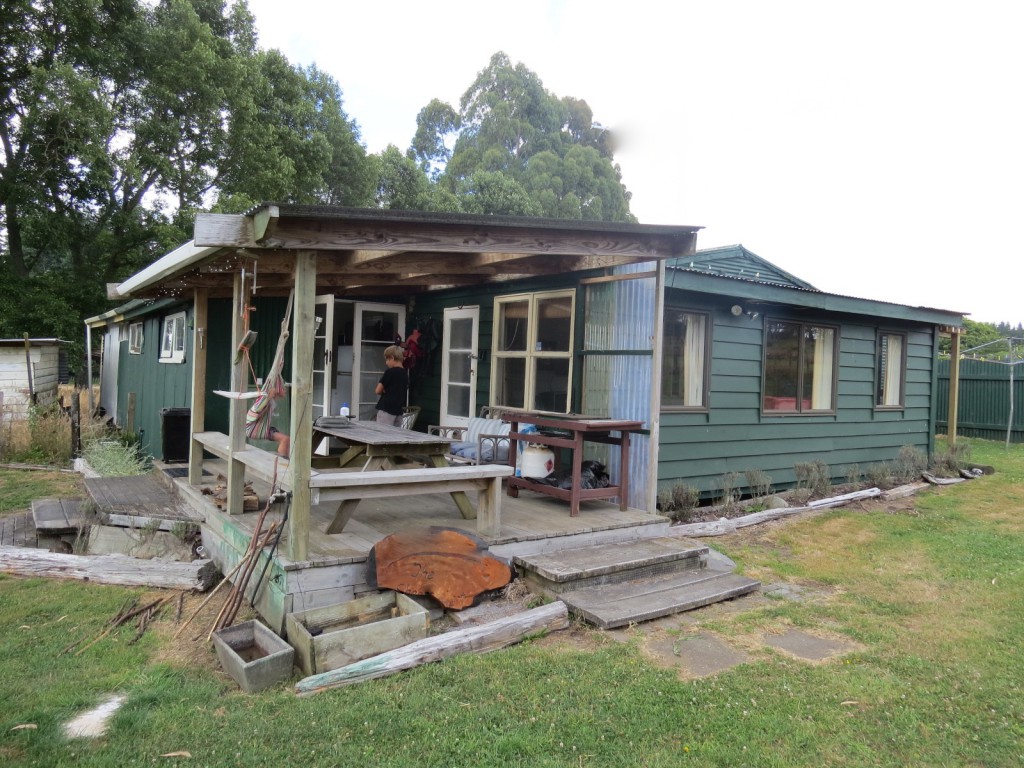 From Waitomo, we drove east to Rotorua to stay at a ‘bach’ called The Shearers Retreat recommended by the Dishmans. This was a little bit of farming history, as it was the original accommodation of the transient sheep shearers who would come to the area for their annual work. For us it was the perfect place to unwind, as it was both rustic and cosy and on a small farm owned by Celia, John and their 3-year-old daughter Kiara. The boys loved it when Celia took them on her quad bike to feed the chickens and egg hunt with Kiara, and before we left John took them for a ‘burn’ in his replica Lotus 7 that he was in the final stages of building! 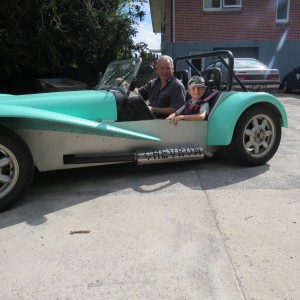 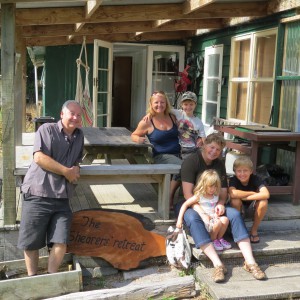 Rotorua is well-known for it’s geo-thermal activity, and as soon as you enter the town you can smell the rotten-egg smell of sulphur from the volcanic vents covering the landscape here. Kuirua Park is free & great for seeing these steaming, smelly vents or bubbling mud-pits but we also visited Wai-o-Tapu (Sacred Waters) to see the large scale, multi-coloured pools created by the different minerals from the vents. Beautiful but incredibly hot! The boys nearly melted, and I was disappointed by the very misleading, but beautiful Champagne Pool – not a glass in sight!

Rotorua has a lot to offer in the way of man-made entertainment too, with all the crazy Kiwi-invented activities to do, including OGO, a large plastic ball that you roll down a hill inside with water lubricating your ride. Of course, this was exactly the kind of thing Cameron loves and “best fun ever” was his summary. For the less adventurous members of the Walker household there was a trip to Rainbow Springs Kiwi Conservation where a tour of the hatching facility for baby Kiwis was a highlight. They collect Kiwi eggs from the wild where they have 5% chance of survival to incubate and hatch them here until the gorgeous little brown balls of fuzz are big enough to defend themselves thus raising their chances to 75%.   And if that is not enough excitement for one day they have a water flume ride too, although not sure how the two are connected? 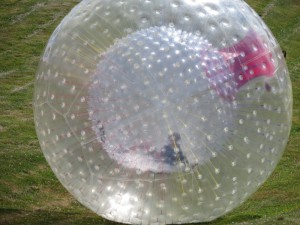 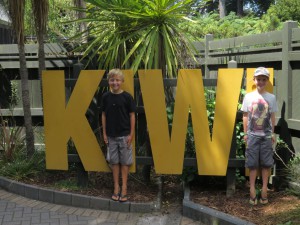 Our stay coincided with the Rotorua Agricultural & Pastoral Show that included something for everyone. For Ollie a ride in a WWII US Army Jeep, for Cameron challenging a NZ soldier to a leg squat competition, for Ben the other testosterone display known as the Axeman wood-chopping competition and for me the Best Llama judging, they really have the prettiest eyes. 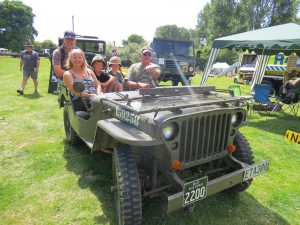 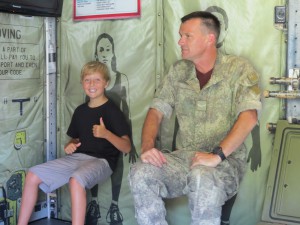 Other highlights of Rotorua included a walk in the giant Redwood forest and Kerosene Creek, a local’s swimming spot that turned out to be a ‘hot’ water stream that was a bit weird on a really hot day. 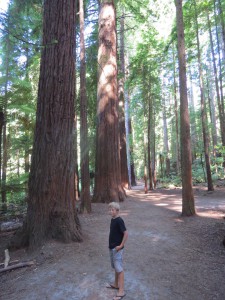 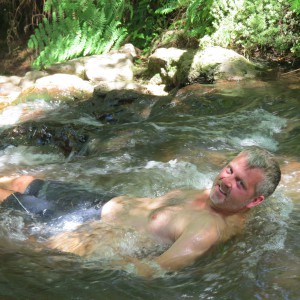 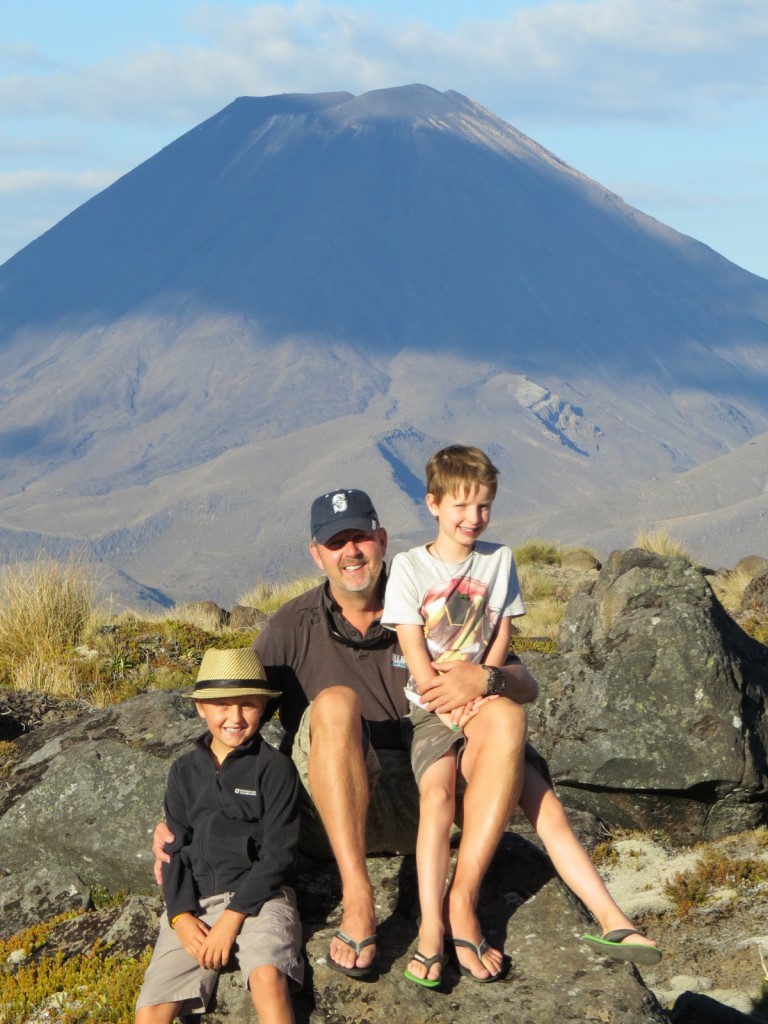 Mt Doom without the Orcs!?

From here, it was a drive south to Lake Taupo which is in the caldera left by the explosion of the Oruanui Volcano a few hundred thousand years ago – to give it some scale Krakatoa spewed out 8 cu/km of ash, this one was 750 cu/km! For us it provided a great swim stop as the water was clear and refreshing, and the views awesome. The boys went a bit Lord of the Flies on us here! Continuing the volcano theme we drove through the Tangiriro National Park and up to the ski-fields that cover the Mt Ruapehu (another still regularly active volcano). The Park also contains Mt Ngauruhoe, otherwise known as Mount Doom, since starring in the Rings series. And finally, just so it’s clear that we are all big LofRings/Hobbit fans we stayed overnight in the Hobbit Motel in Ohakune, very nice, but was not a hole in the ground – much to Ollie’s disappointment! 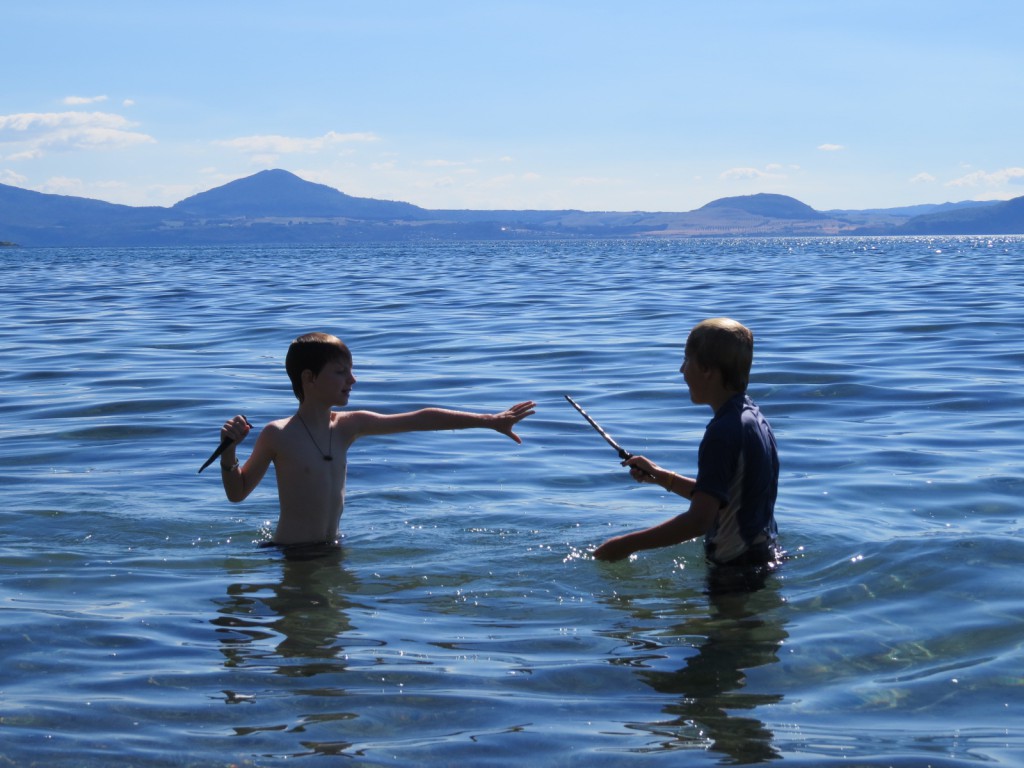 Then it was down to Wellington for a few days before moving onto the South Island.  The boys have already blogged about Weta Workshop & Te Papa museum both of which were fantastic for kids.  Wellington has a fantastic relaxed vibe, with a gorgeous harbour and city beaches.  And luckily for us it wasn’t windy which is unusual, just hot and sunny – and oozing with charm. 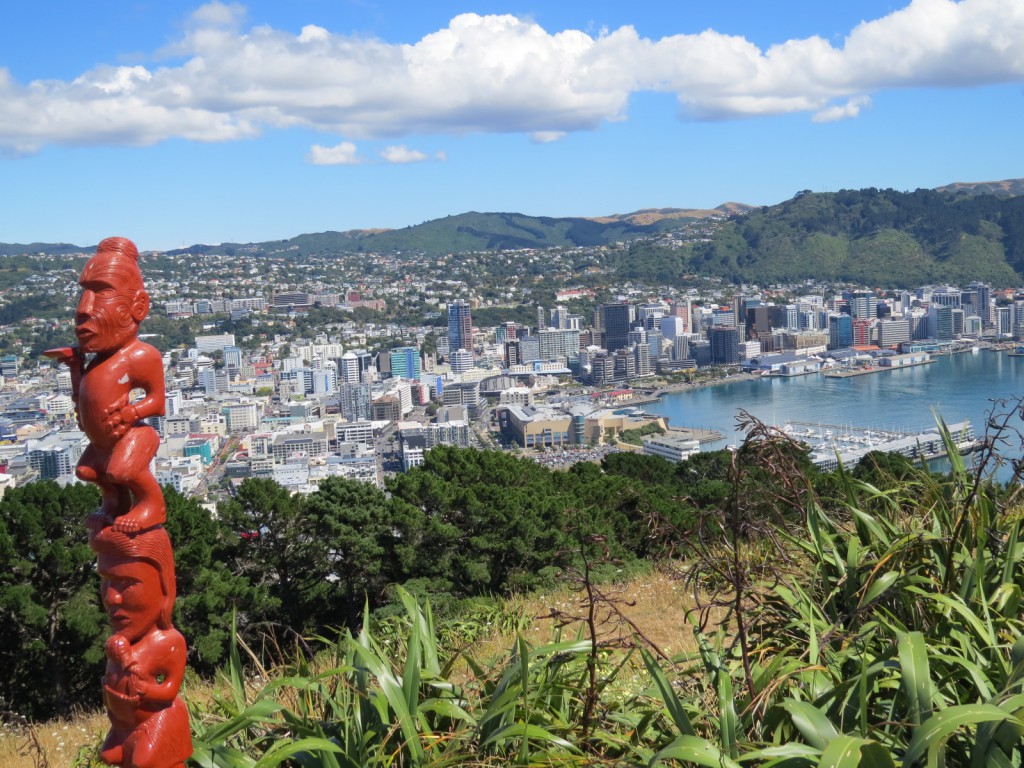 5 Responses to Glow-worms at Waitomo to Zorbing in Rotorua