4 Highlights from a day in Rio

Adele – Our tour of Rio day started off with Ollie having a high temperature during the night with 1 of us cooling him down with wet towels and the other frantically “googling” the symptoms of malaria and the location of the nearest hospital in Rio at 2am.

Thankfully after a dose of paracetamol and a bit more sleep he was back to his inquisitive self by the morning. Fortunately our understanding tour guide Ederson was happy to push our trip back until the afternoon and by 1pm we were off. First stop the Parque Nacional da Tijuca, where we visited a beautiful waterfall on our way up to the Chinese lookout. The park is an urban rainforest surrounding the city of Rio. Its height also makes it the perfect spot to get a truly stunning view of the city from above; we actually did ‘gasp’ when we saw it!   Ederson gave us an interesting run down on Rio’s eventful history and his enthusiasm was truly infectious, we knew we were in for a treat 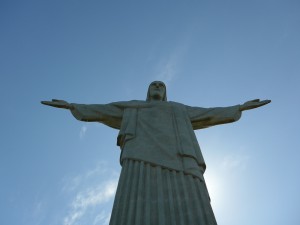 Oliver – Cristo Redentor or Christ the Redeemer is the giant statue of Christ that stands over Rio protecting the city since 1932. We went up there in small buses as it is at the top of Corcovada Mountain in the national park. The statue, made of soapstone, is over 40 meters tall, including the podium and can be seen from most of Rio and at night there are lights shining on it too which makes it even prettier.   I felt like it was looking after me so I bought a little copy of the statue to keep me safe while I am travelling. 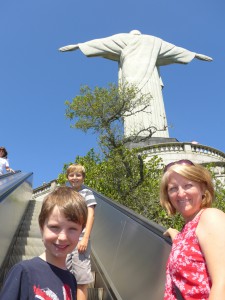 The escalators were a surprise but gratefully used as it was hot up here! 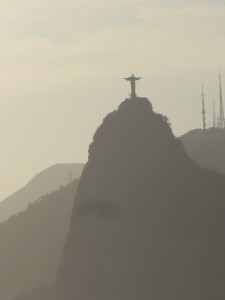 Cameron – Next we visited Pão de Açúcar , or Sugarloaf Mountain. As we were walking to get on our cable-car to the summit, Mum looked up at the height and was a bit scared as it looks very steep. Each cable car took 64 people and we had to take 2 to get to the top.   The second trip had astonishing views of Rio. We also saw a few monkeys that Ederson said were marmosets, carrying their young on their backs.   At the peak there was a large board of signatures of people who have reached the top of Sugarloaf, so I asked Dad to lift me up so I could put my name at the top so everyone could see it. 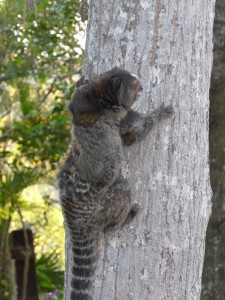 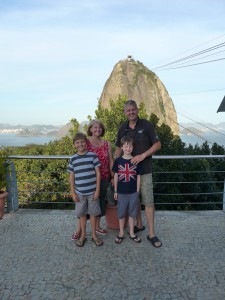 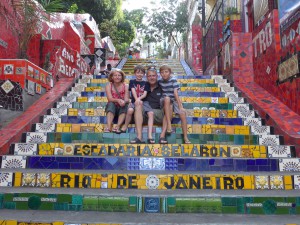 Colourful use of tiles by the artist Selaron in Rio.

Ben – A special mention must go to Ederson of Trip In Rio, whose good humour, enthusiasm and generosity made it such a memorable day for us all. Aside from giving us a fantastic tour of his amazing city, we also had a good laugh (mainly at my expense, I would add!!). One particularly funny moment happened when I told Ederson that I had received an email from another guide the previous evening inviting us to “see the best from Rio playing at the Maracanã……..Flamengo”.   When I mentioned that we didn’t much fancy spending the evening watching a dancing show, Ederson burst into laughter and told me that Flamengo is one of Rio’s most popular football teams, and Maracanã is the Brazil’s largest stadium!!! Teaching me some more words in Portuguese was a priority after that!!. 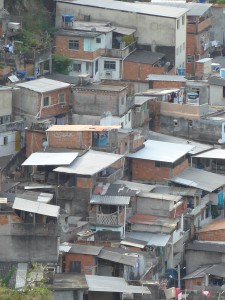 On a more serious note, we learned more about the infamous Favelas and how 3 million people in Rio live in these neighbourhoods (there are 700 favelas in the City). Perhaps like most people, our perception of these areas was that they are squalid, lawless slums rife with violence and drugs. With Ederson’s insights we now have a more balanced view and realise that the vast majority of the people living in favelas are ordinary, law abiding people trying to make ends meet.  There’s no doubt though that drug trafficking is a problem that leads to a high crime rate, which the authorities are tackling with some pretty tough policies.  The World Cup and up-coming Olympics in 2016 seem to have given a strong impetus to “clean up” the City’s image. 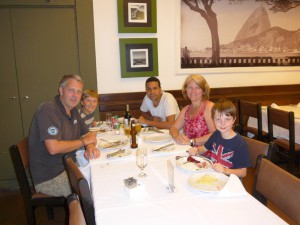 enjoying BBQ with Ederson of Trip in Rio 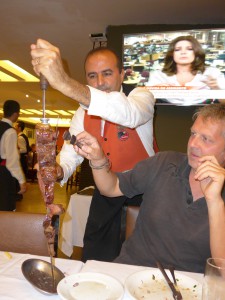 A final thanks to Ederson for going out of his way to take us to a traditional Brazilian BBQ grill, where we enjoyed an all you can eat buffet, and the waiters bring skewers of amazing meats to your table that they carve for you. The chicken hearts were a big hit with me and Adele, and the boys until we told them what they were!!! Apparently, Ronaldo is a regular at the restaurant!!!

Tomorrow we head out of the city to the popular beach town of Paraty.

4 Responses to 4 Highlights from a day in Rio