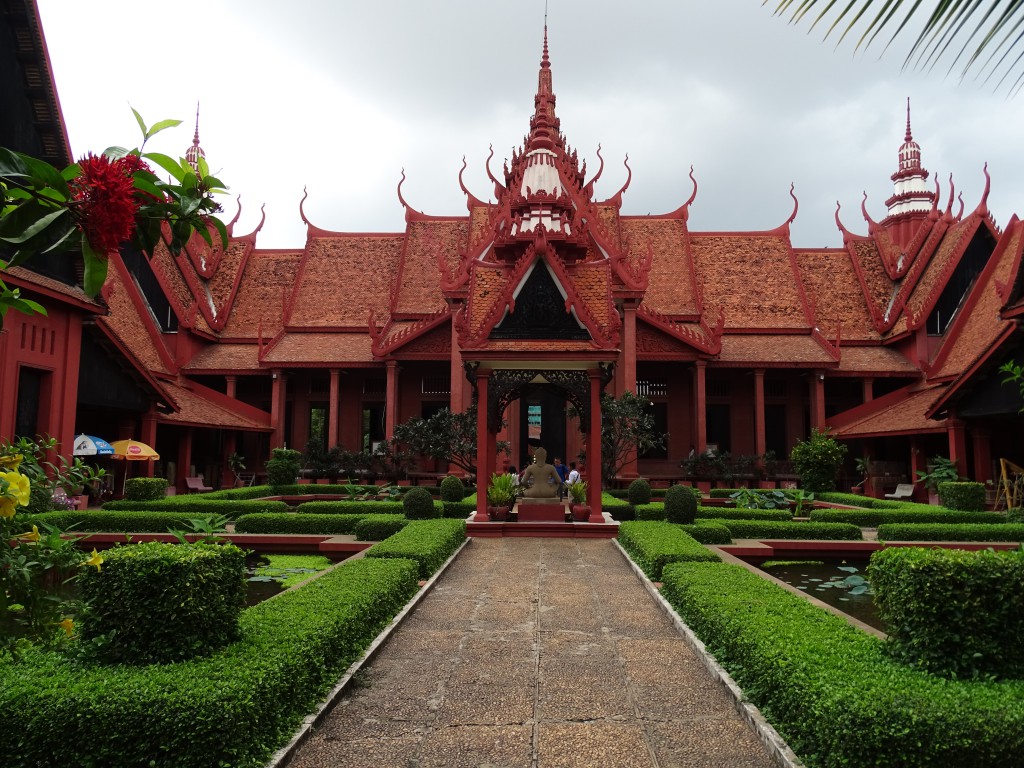 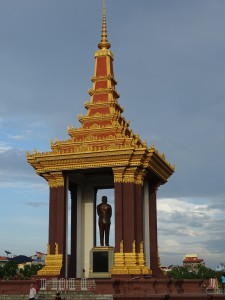 e caught the tourist boat from Vietnam into Phnom Penh, Cambodia along the Mekong River and our first impression was of a quieter, more affluent city with much less of the hustle and bustle of the cities in Vietnam – certainly a lot less scooters! Our accommodation at the fabulous One Up Banana Hotel was located in the expat & tourist area and the number of brand new luxury cars here (mostly big 4wds) was extraordinary. Although once you get out of the city you are confronted by such poverty that it makes you realise the division of wealth here is at its most extreme. 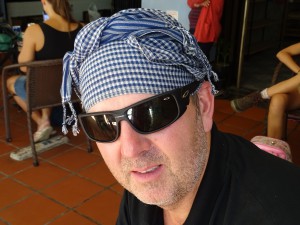 I hate to admit it but we did take advantage of the westernisation of this part of town by going to Costa Coffee a few times. They have ordinary coffee here, which we were craving, but also really good air conditioning! Cambodia is a little cooler than Vietnam but it’s still hot, thirsty work walking around cities. We do usually prefer to spend our money in locally owned establishments if possible though. Money is confusing here, as everything is priced in USD dollars (you can get them out of the ATM), but your change often comes back in a mix of dollars and Riel, the local currency. I am hopeless at this, and have no idea if am getting the right change – thank god Ben knows what he’s doing. 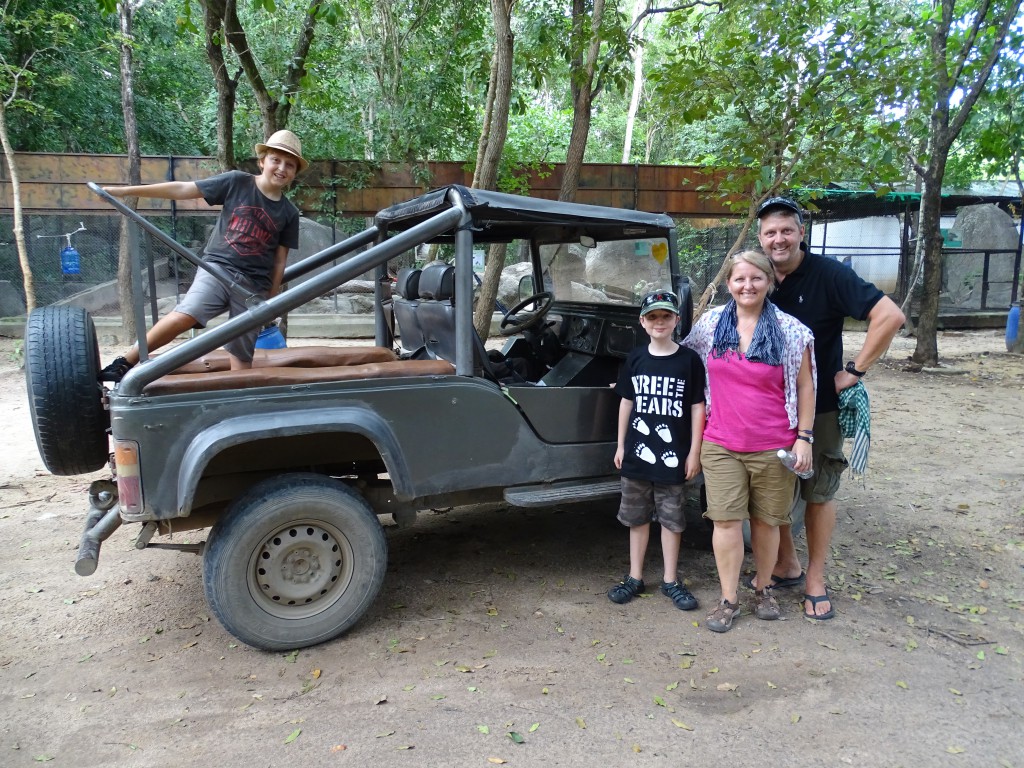 Travelling in the jeep!

It was also Oliver’s 9th birthday while we were in Phnom Penh, so we wanted to do some kid-friendly sightseeing and Oliver chose to spend a day at the Phnom Tamao Wildlife Sanctuary about an hours’ drive outside the City. This is the only conservation centre for animals rescued from private ownership or injured wildlife, and they rehabilitate and return 90% of the animals to the wild. Here we met many gibbons who had, unfortunately, been kept as pets and not treated very well, but they still crave human companionship wanting you to scratch their backs through the bars. It is also the headquarters of the ‘Free The Bears’ Australian charity that finds and cares for Sun & Moon Bears. Then we saw an 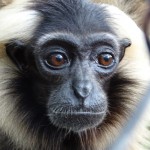 elephant with a prosthetic leg and were ‘sprayed’ on by an unfriendly Tiger. Ever had that happen to you, it’s not pleasant! 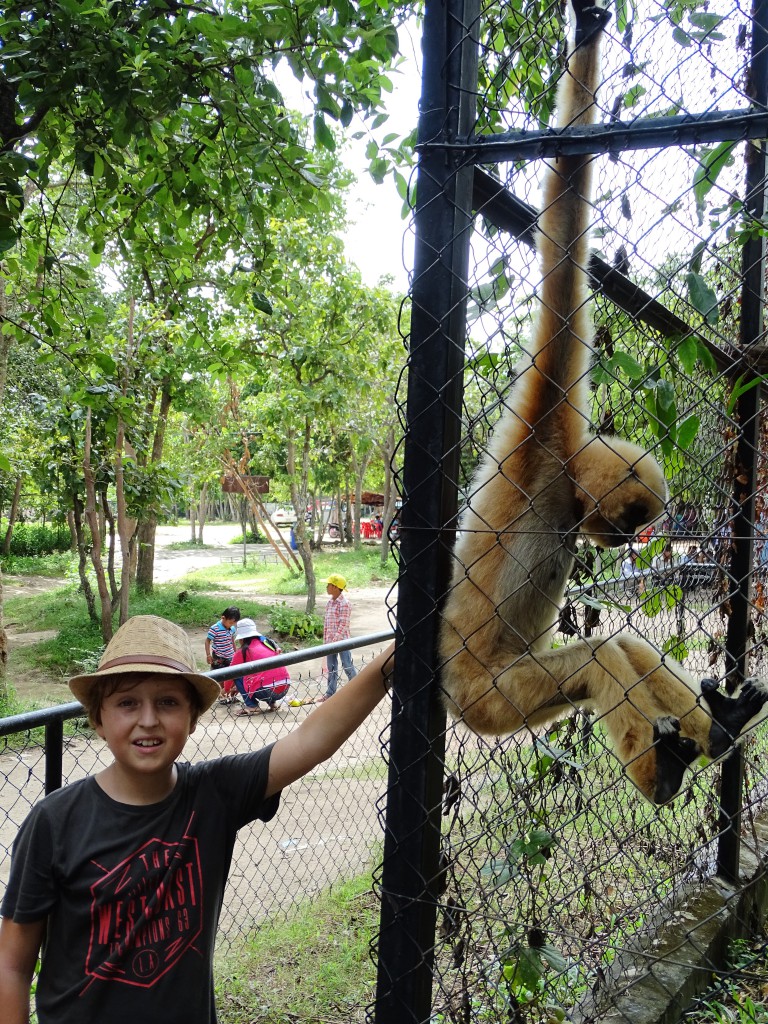 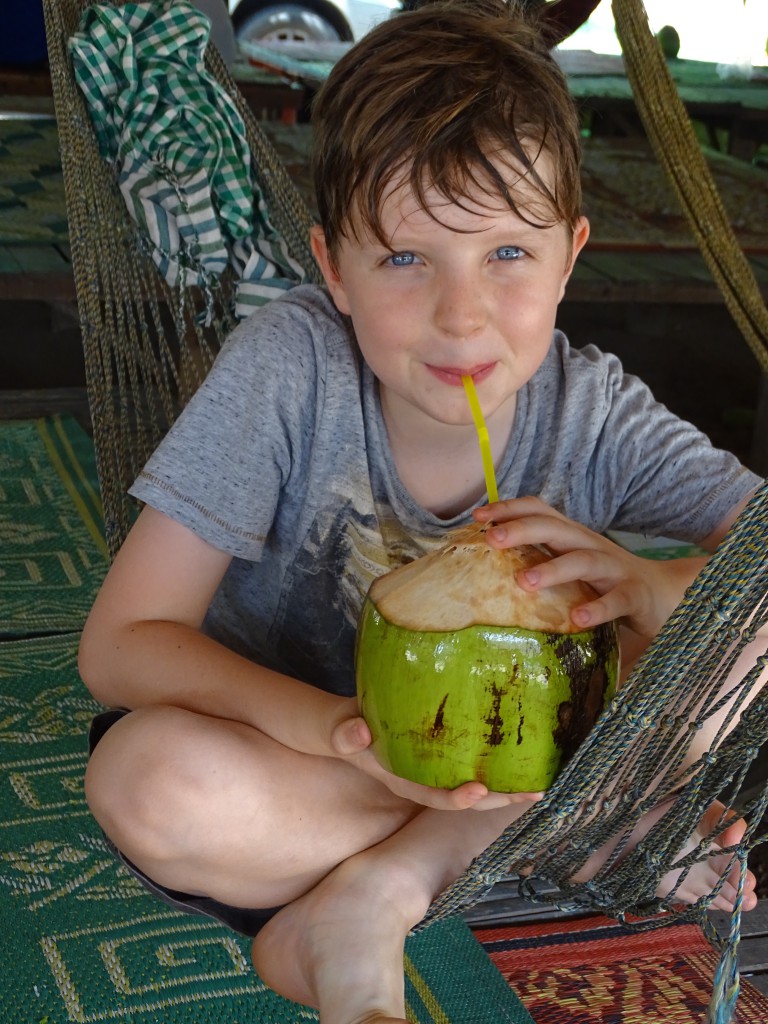 On the day of Ollie’s 9th birthday we went to Kids City, here’s his take on it:

“Kid’s City is a big 8 story building where each floor had a different activity. The first floor we did was Rock Climbing with 25 different climbing walls, my favourite was called the Stairway To Heaven, which was 12 poles in an oval shape getting higher and higher and you had to jump up to the next pole until you were about 20 feet off the floor, then you had to hold onto your harness and jump down the middle which was great fun, but you kept banging into the poles on your way down. My Mum was too scared to watch me, even though I was wearing a harness. 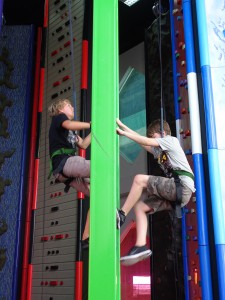 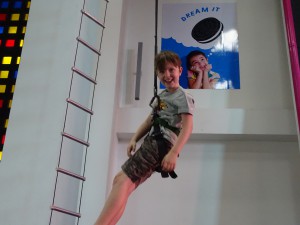 Next Cam and I went to the Laser Tag floor where we played with other kids from different countries in different zones and with flashing lights and obstacles to shoot from and hide behind. I got Most Accurate and Most Trigger Happy! Our last floor was the science discovery where I got to ride a high wire bicycle and Cameron went in a gyro sphere machine like they use to train astronauts. He said it as fun but I didn’t want to get dizzy hanging upside down. 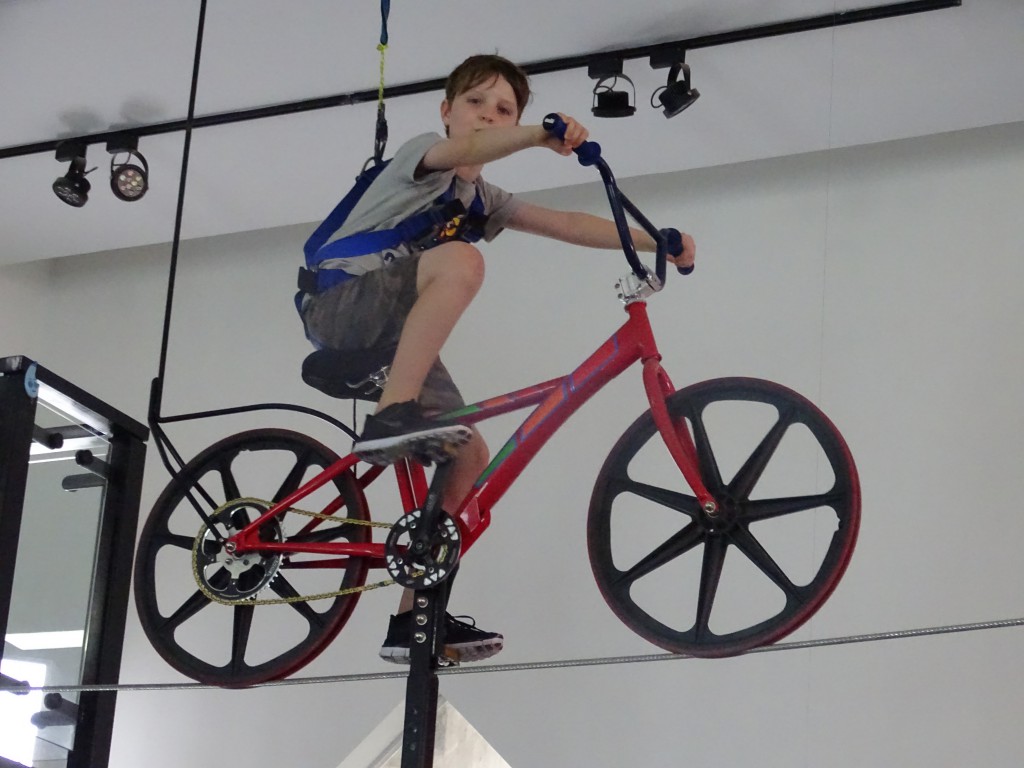 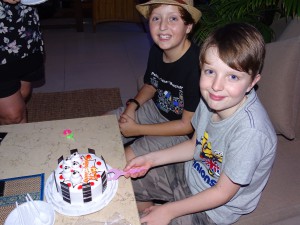 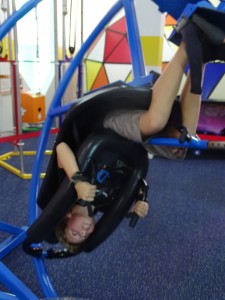 When we got back to the hotel Cameron had planned a surprise birthday cake for me with layers of cream jam and cute little Sun Bears on top. It was an awesome birthday.”

But it wasn’t all fun and games, we also fitted in an educational trip to the National Museum to see the statues and antiques from some of the temples destroyed during the Khmer Rouge era and also to the Royal Palace which was very beautiful and serene. They have great displays in the Silver Pagoda of some of the gifts received by the Royal Family over the years, so lots of gold, diamonds and silver ware. It is still rainy season too, so we are wearing disposable raincoats in all our photos but it doesn’t last long and is still really hot. 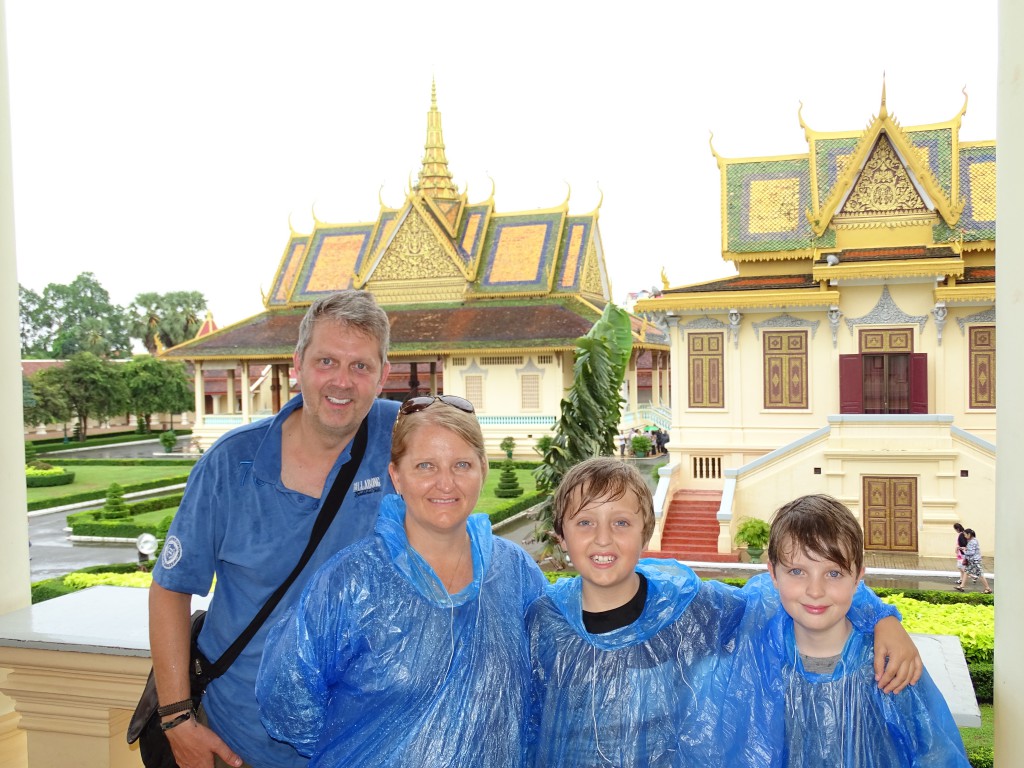 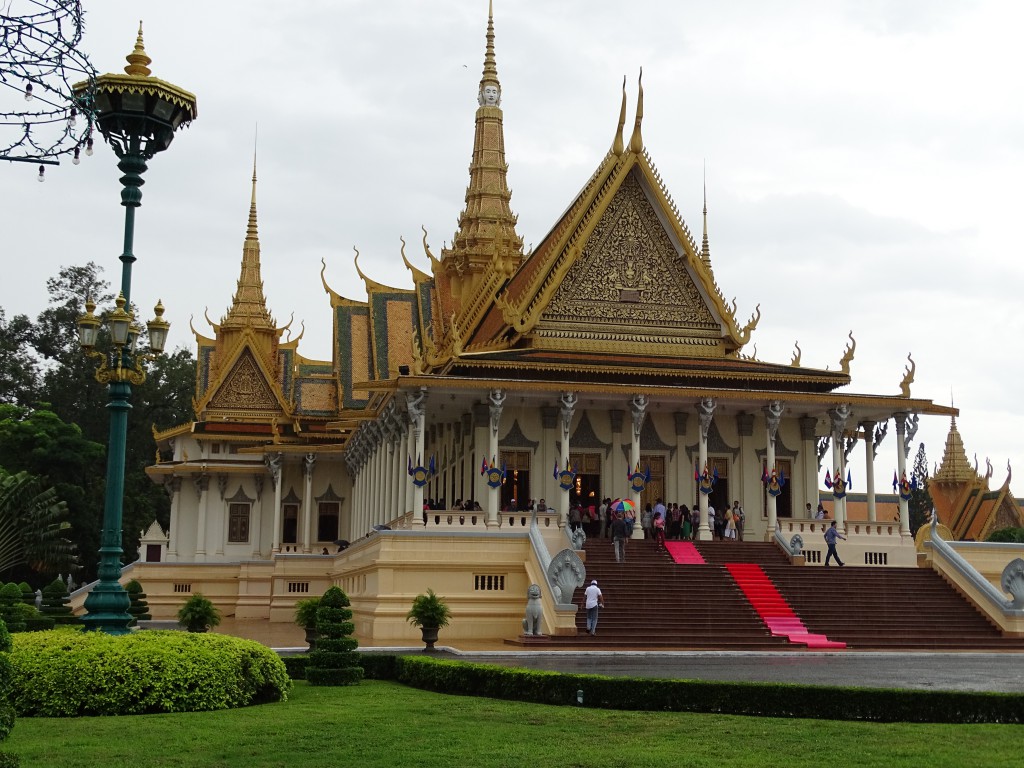 Finally, Ben went to the Killing Fields, a must do if you want to understand the more recent dark history of the Khmer people.  They have a memorial at Choeung Ek Village, and the Tuol Sleng Genocide Museum, both of which give an account of the terrible atrocities carried out under Pol Pot and the Khmer Rouge Régime in the 1970s, against their own people.  It is estimated that around 2 million people were killed at this time, out of a population of only 8 million. It is impossible to speak to anyone here in Cambodia who has not lost multiple members of their families during this period.  Their stories are shocking and tragic, but like all survivors they want people to understand how this could have happened in our recent past to avoid it happening again – if only it were that simple. 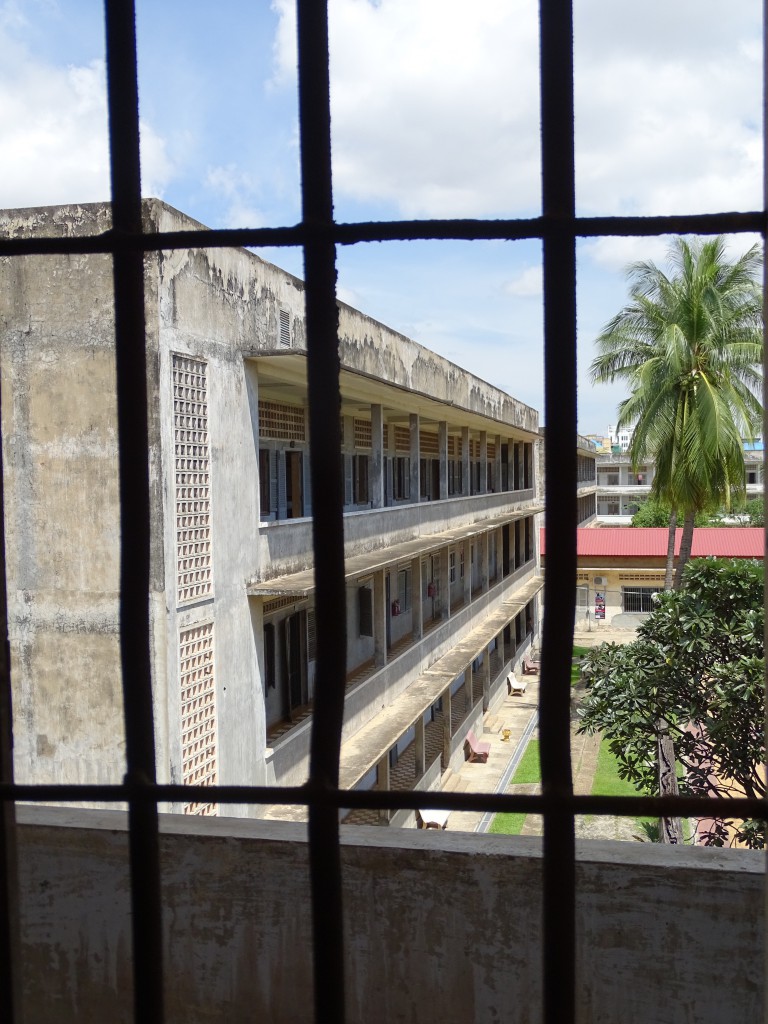 School used as a prison during the Khmer period. 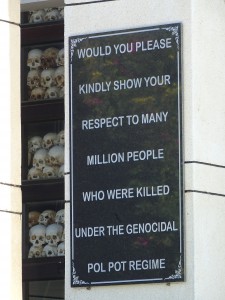 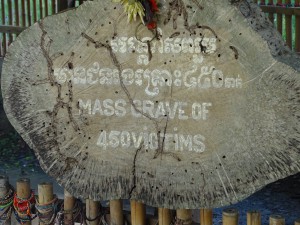