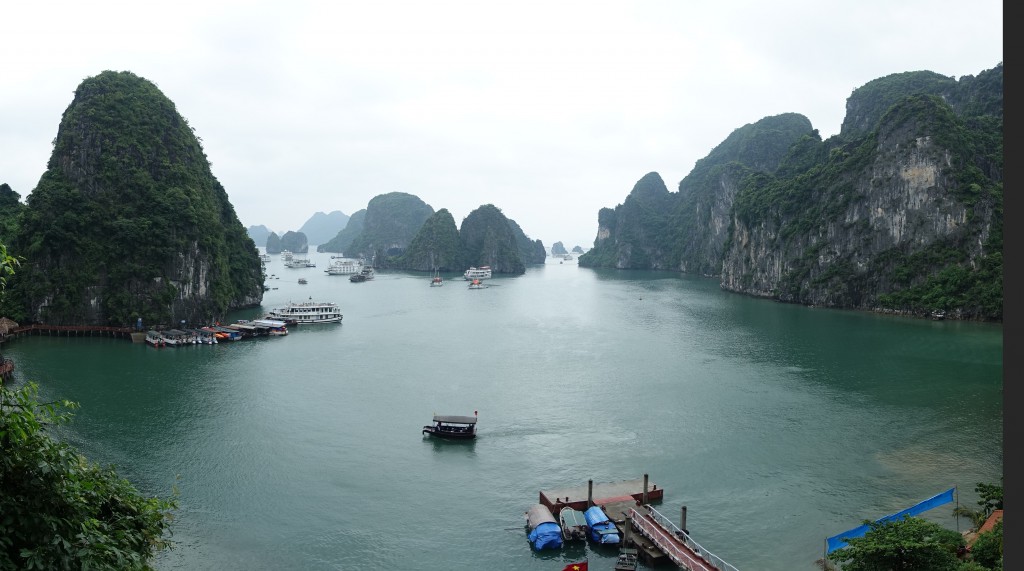 We left the winding bustling streets of Hanoi behind to travel to the serene beauty of Halong Bay. We had pre- booked 2 nights on a cruise ship, the Glory Legend, to see the 2,000 or so limestone karsts that rise out of the bay in this incredible Unesco World Heritage Site, and both the ship and the bay were a revelation. We had two beautifully furnished connecting wood-panelled cabins with floor to ceiling sliding windows to take in the view, quite a step up from the camper trailer!! 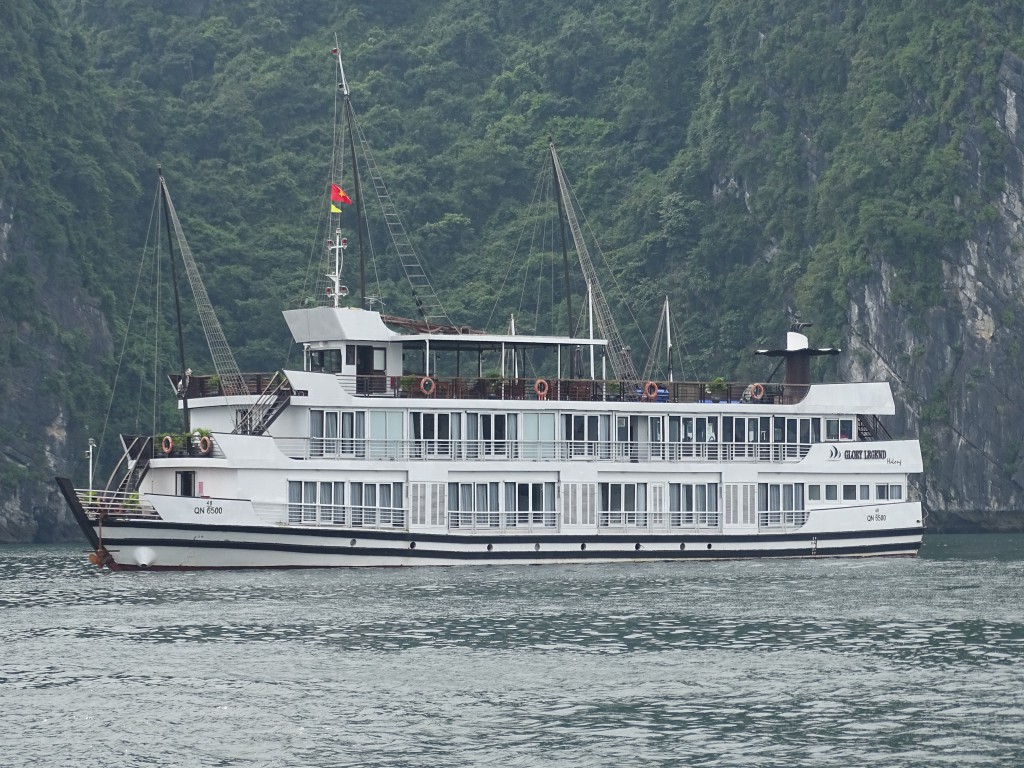 The food was also sublime (but too many courses) and the cocktails were plentiful on the extended Happy Hour. We went kayaking, swimming (with Luc our brilliant host), and squid fishing (Ollie got a great specimen), and they took us to one of the biggest cave systems Ben & I have ever been in. 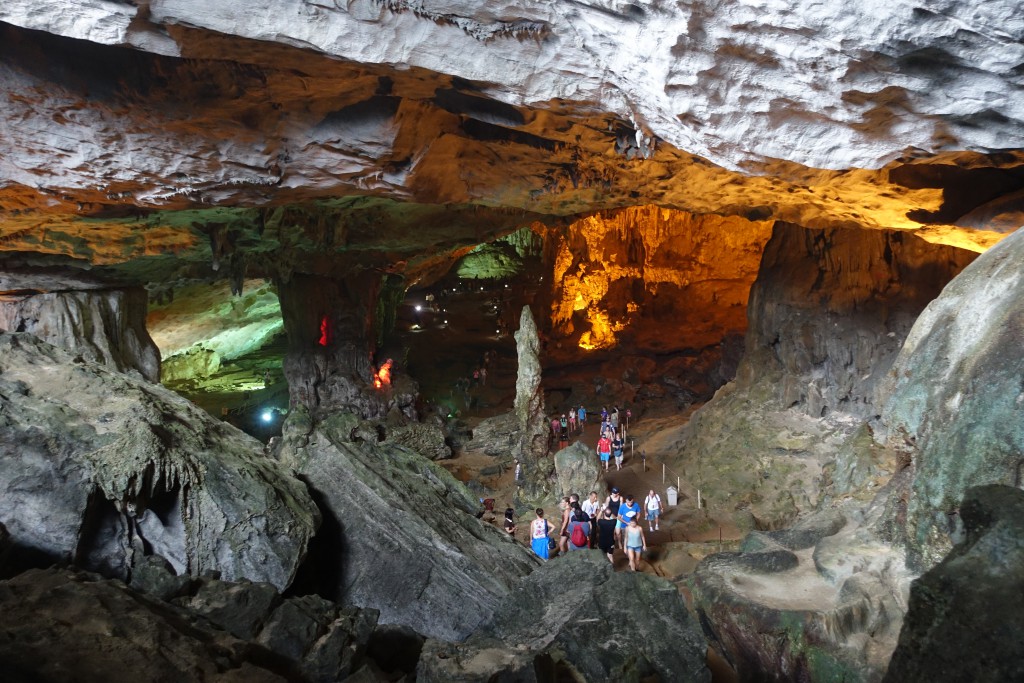 But best moment for the kids was a bamboo boat trip to see the Cat Ba Legurs (monkeys) they have introduced on one of the tree covered karsts as part of a conservation programme, and they seemed to put on a show for us, swinging down through the trees to the waters edge to get a closer look at the humans! 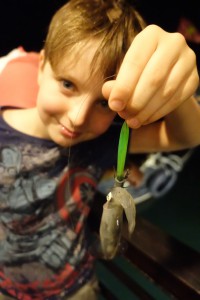 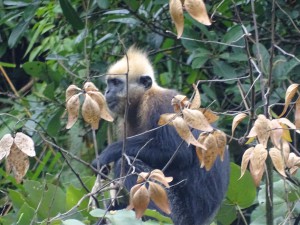 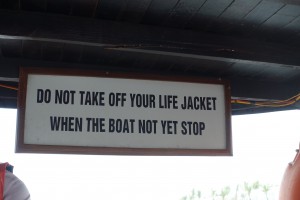 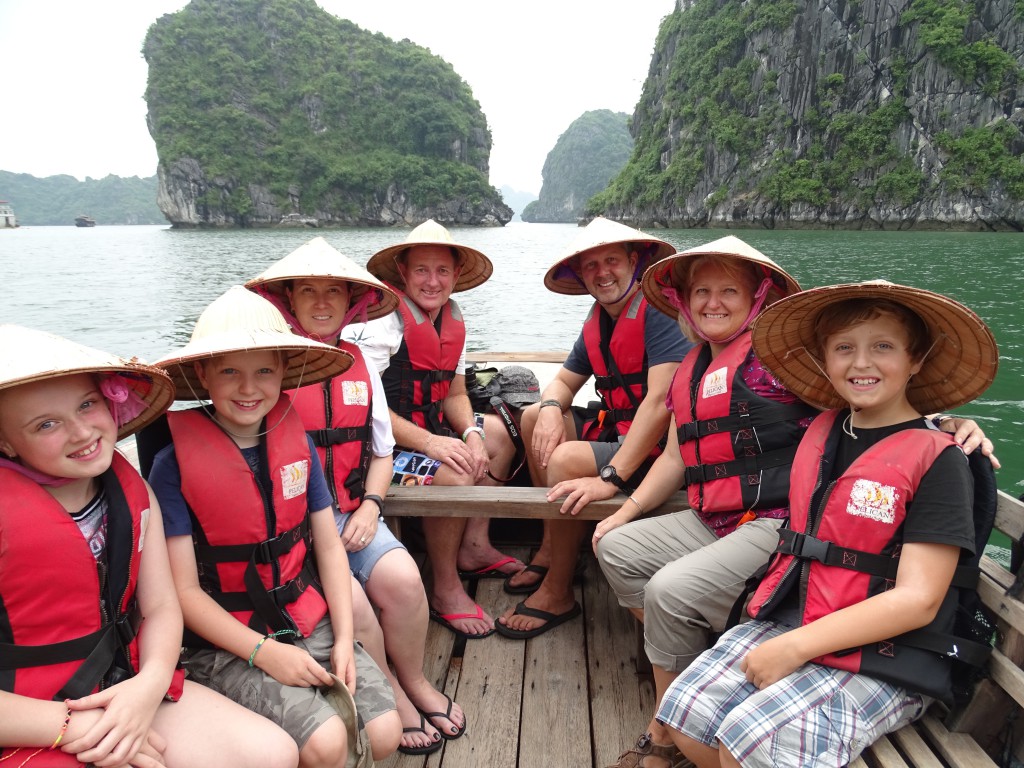 So we practically rolled off the cruise ship, to fly to Hue, an hour south, and the site of the imperial palace of the Nguyen Dynasty, the last royal rulers of Vietnam. They built an impressive citadel with a ‘forbidden’ city inside for the royal family and their retainers. Unfortunately, the Vietnam War of the 1960-70s destroyed many of the historical sites in this City, but much of it is slowly being rebuilt. We also visited some of the splendid royal burial tombs of the Nguyen Dynasty that are dotted around the City. 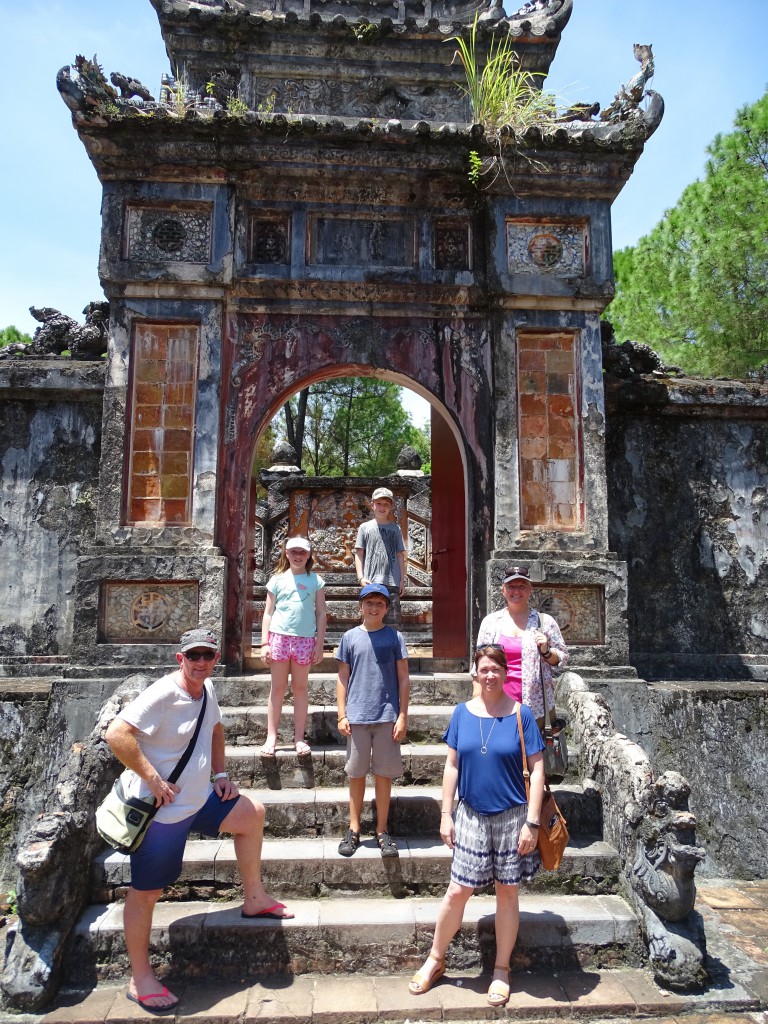 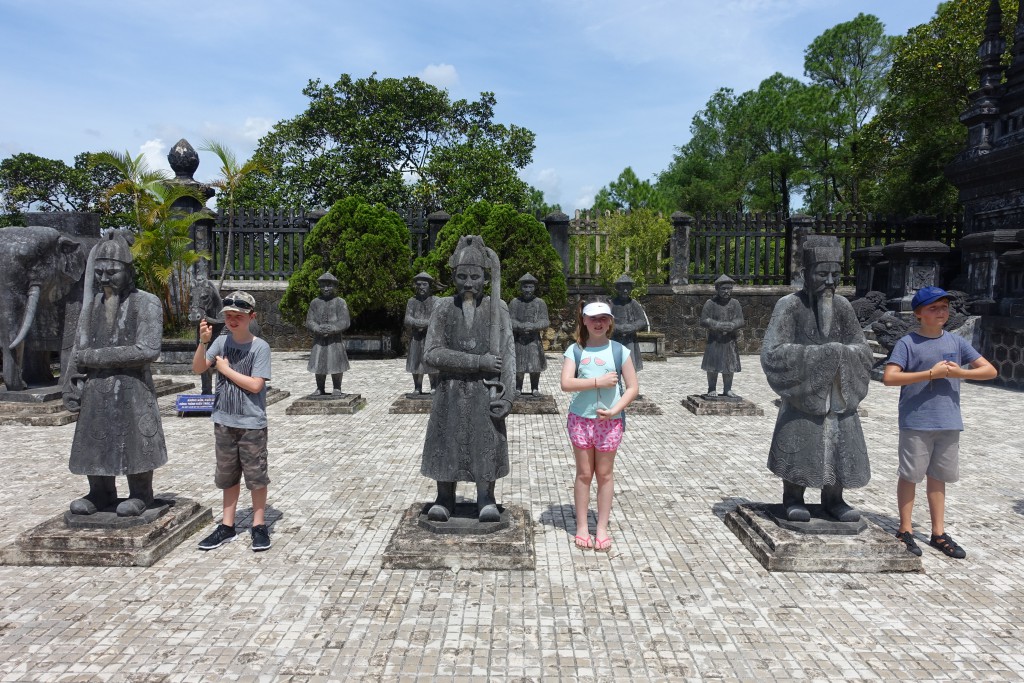 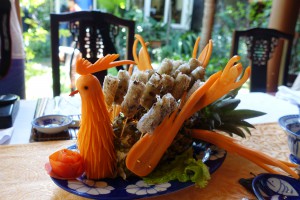 It was an incredibly hot day and the kids all did really well walking around so much, so welcomed a lunch break in a restaurant owned by a Vietnamese Poet, which has some of the most elaborately displayed dishes we’ve ever been served. The Vietnamese food is generally less hot than Thai food, with a more subtle spice and fresh herb palate, and is very reasonably priced outside of the more fancy restaurants; one evening, we paid only 7 pounds for 4 big bowls of chicken & noodle soup and 8 drinks – including beer! 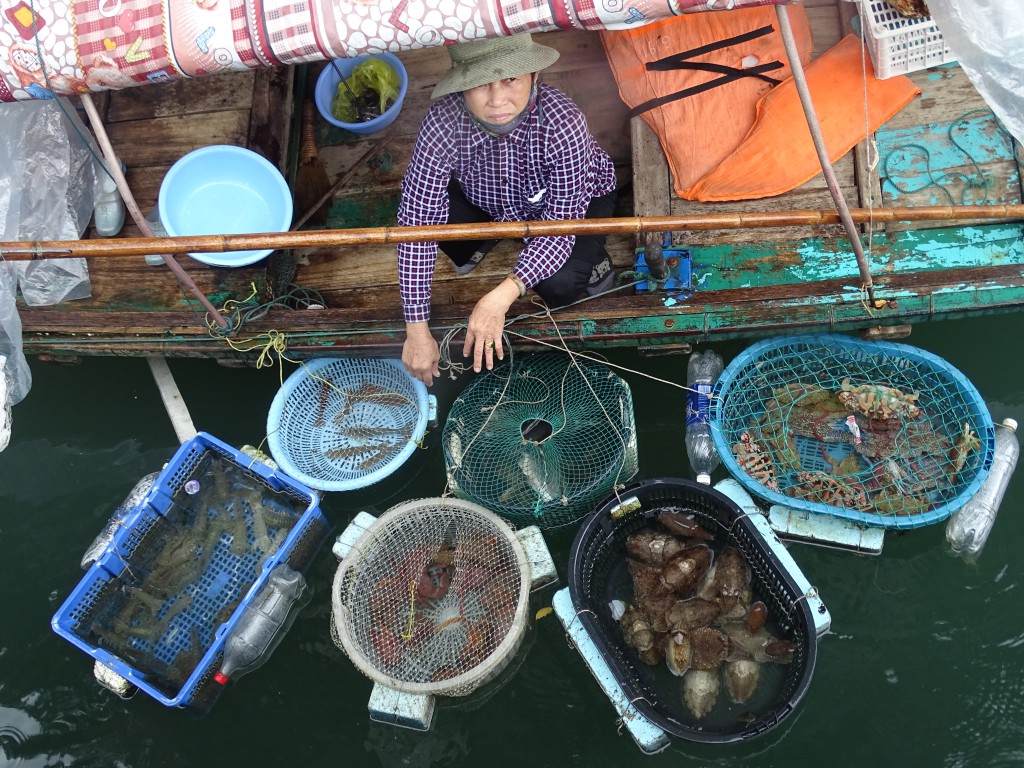 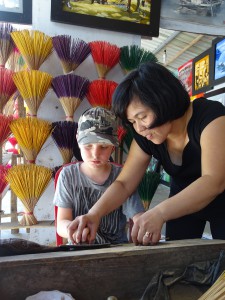 Our visit to the Thien Mu Pagoda, where the Buddhist Monks worship, live (and have been politically active from) was fascinating as the kids, through our guide, spoke to some of the trainee monks, learning that they often come to the pagoda at age 7-8 to begin their spiritual apprenticeship, often as orphans. Around 18 they decide whether to become fully fledged monks or to leave. Shaving your hair is part of this so the monk ‘juniors’ all have these wacky hair-styles while they can. It was a definite cultural learning experience for us all. 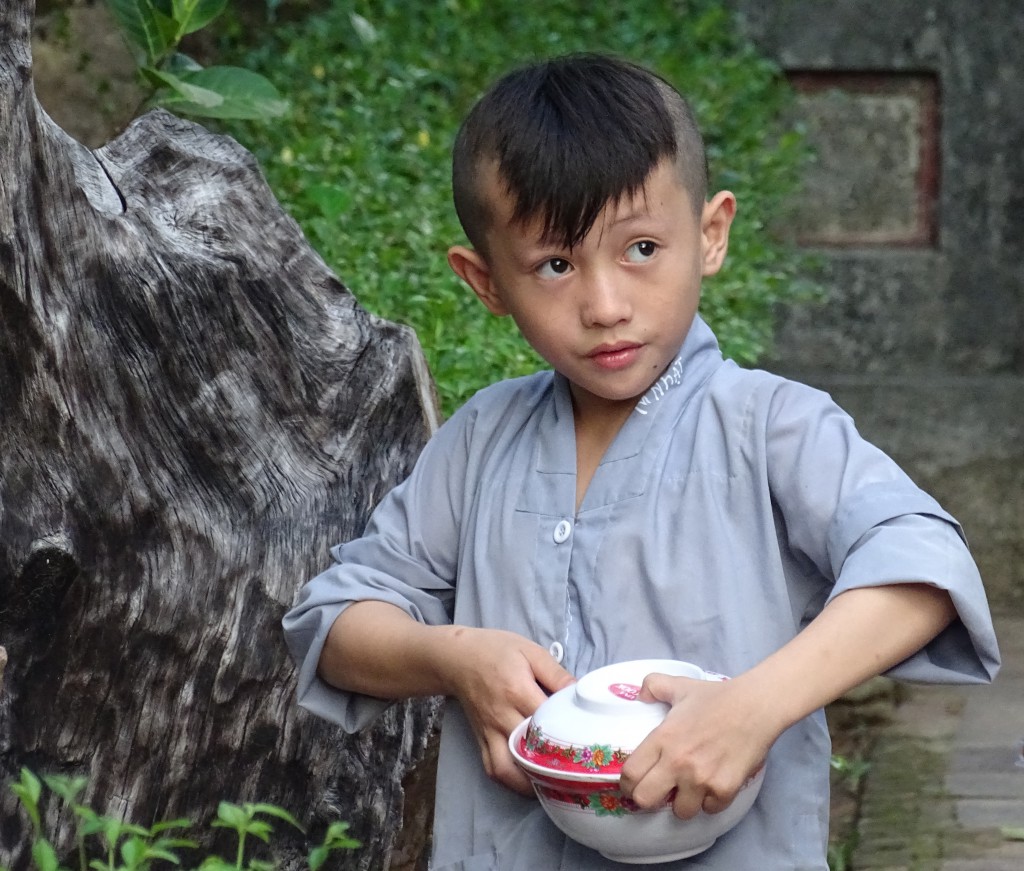 Our time in Hue ended with a dragon boat ‘’tour” along the Perfume River which unfortunately turned out to be a relentless and unavoidable hard selling opportunity for the boat owner – we lost count of how many times we had to say ‘no thanks’, it was a relief to disembark! We were yet to learn the true meaning of hard-sell, which we got on the next leg of our journey from Hue to Hoi An. Our itinerary included a stop at Marble Mountain near Danag, but we instead ended up in a Marble Shop with a ‘helpful’ assistant so hot on Ben’s heels that she actually kept stepping on the back of his thongs!

Some of our favourite scooter photos: 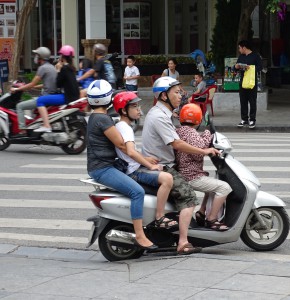 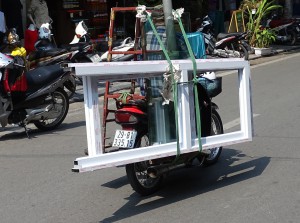 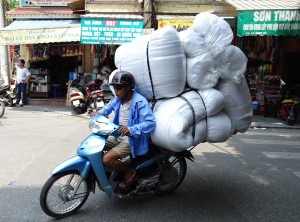 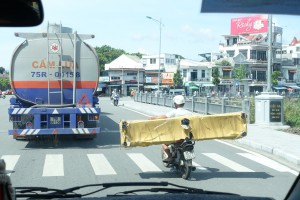 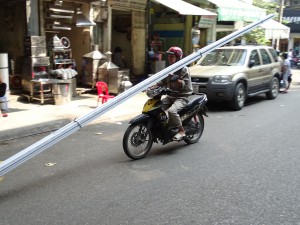