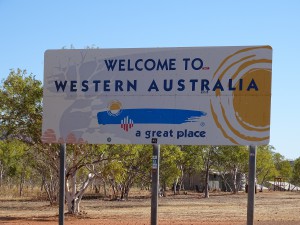 Crossing the border from the Northern Territory into Western Australia meant we were now in The Kimberley region, regarded as the last remaining wilderness in Australia, with vast swathes of red sandy desert, deep gorges and geological wonders we just had to visit. On our list were the world-renowned Horizontal Falls, and the oddly named Bungle Bungles.  Don’t let the understated sign fool you – this is so much more than ‘a great place’! 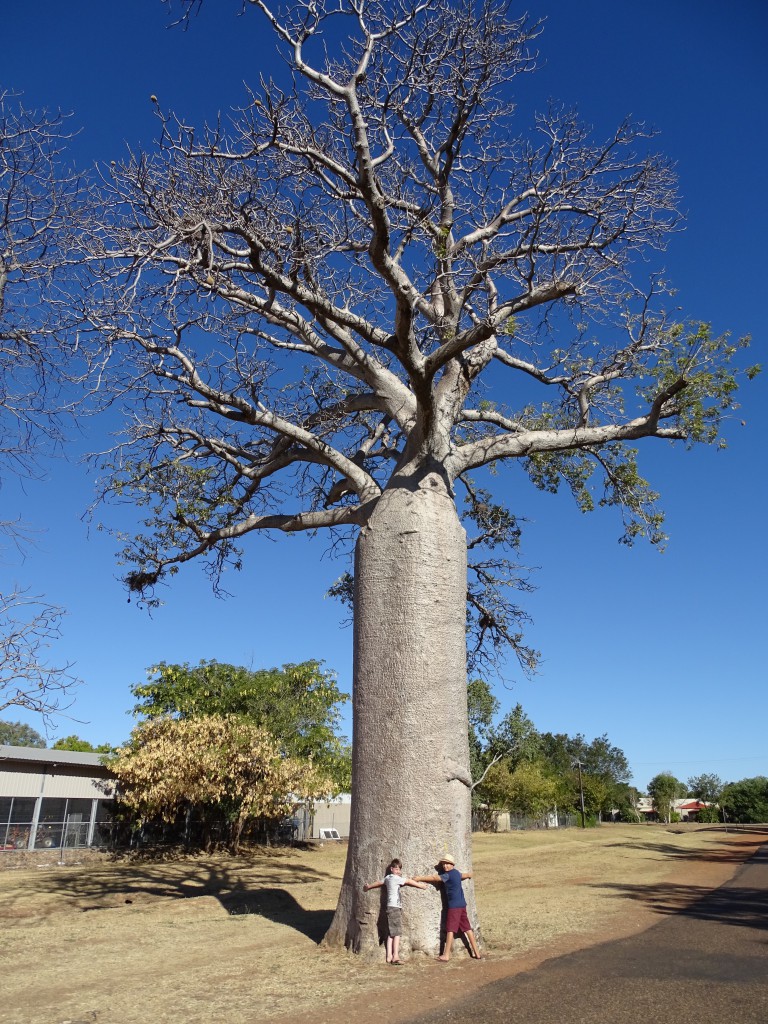 A couple of nights stop at Lake Kununurra recharged our weary batteries, and gave us a chance to watch the nightly migration of millions of bats to their northern feeding grounds, from our lake-front pitch camping site – an extraordinary sight even if you don’t like bats. 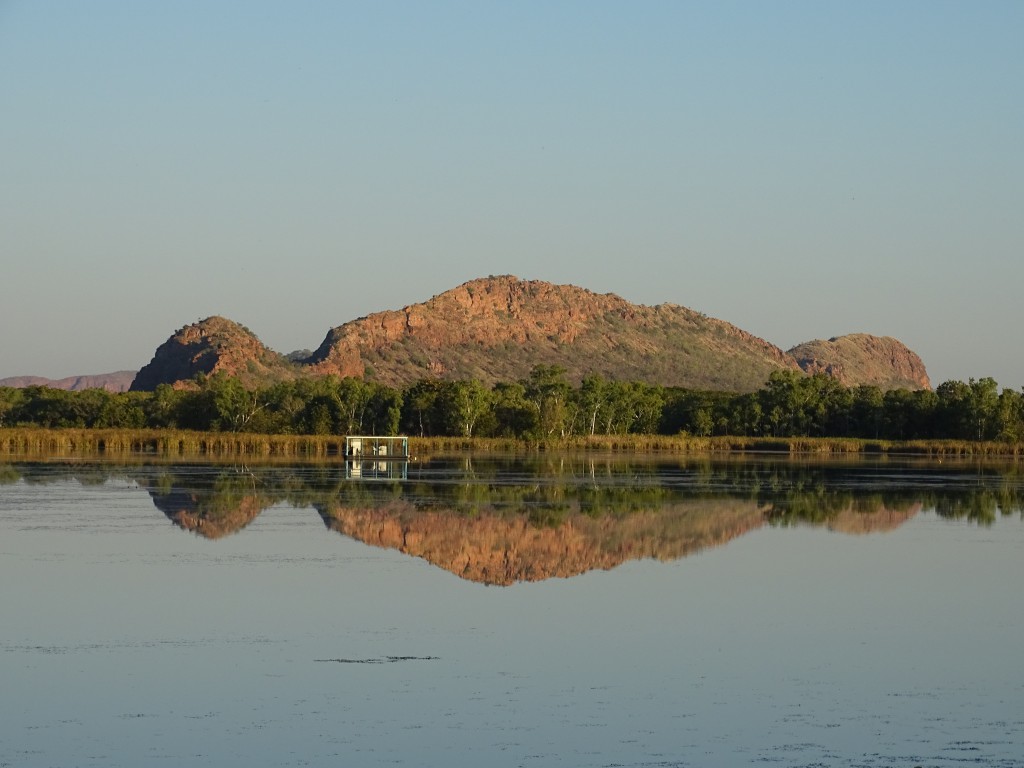 Best view from a caravan park ever! Lake Kununurra and the Sleeping Buddha. 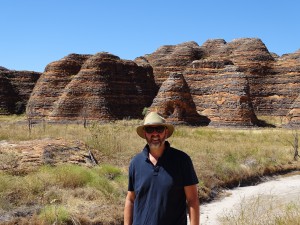 Ben in the Bungles!

A couple of hours south are the Bungle Bungles, in the Purnululu National Park.   The Bungles are an unusual geological feature of striped sandstone domes, and remarkably were not known to the Australian public until 1983 as it was located in the centre of a large, privately owned, cattle station – making it one of the less-visited ‘must-dos’.   The track in was too much for our Ford Territory, so we booked a 4wd tour ‘bus’ instead and were pleased we did, it was a bumpy old ride. The Bungles were impressive though, and even in the 30+ heat, worth the effort, and the Cathedral and Echidna Gorges got a ‘whoa’ from the boys. 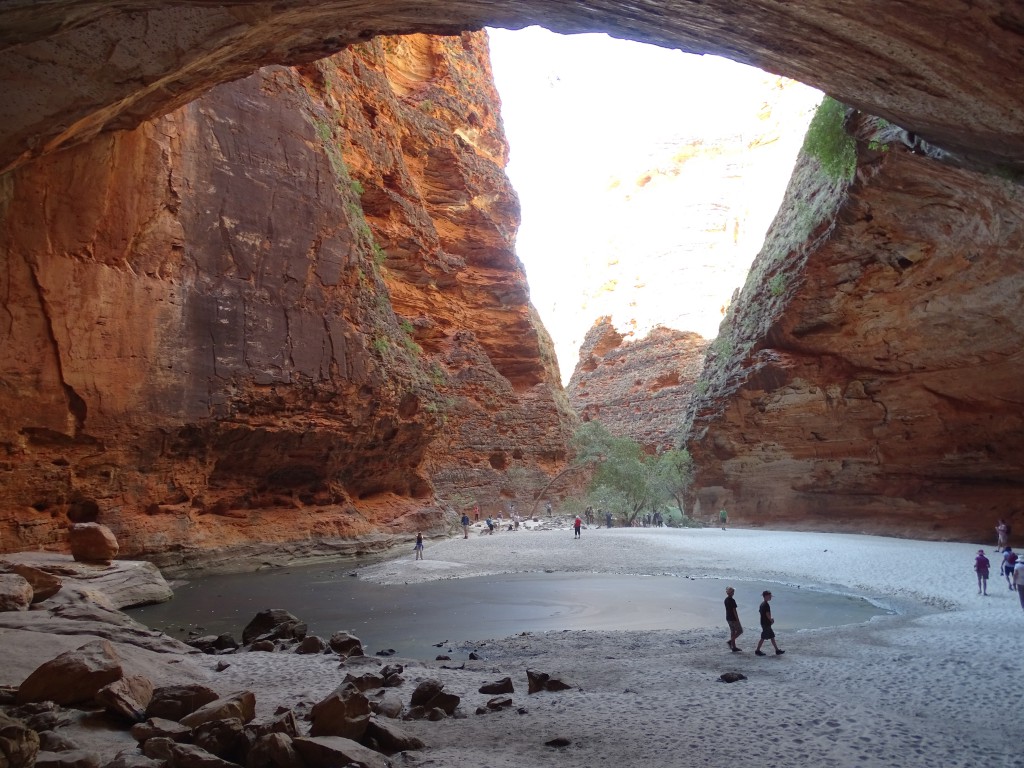 A drive west and we arrived at Derby, for our Horizontal Falls journey. Ben and I had first seen this on an Attenborough programme a couple of years ago, and was something we’ve been looking forward to, as they occur nowhere else in the world. They are called Horizontal Falls because they are two narrow channels in gorges that the huge tides (up to 11 metres!) are squeezed though creating their own sideways waterfall effect. 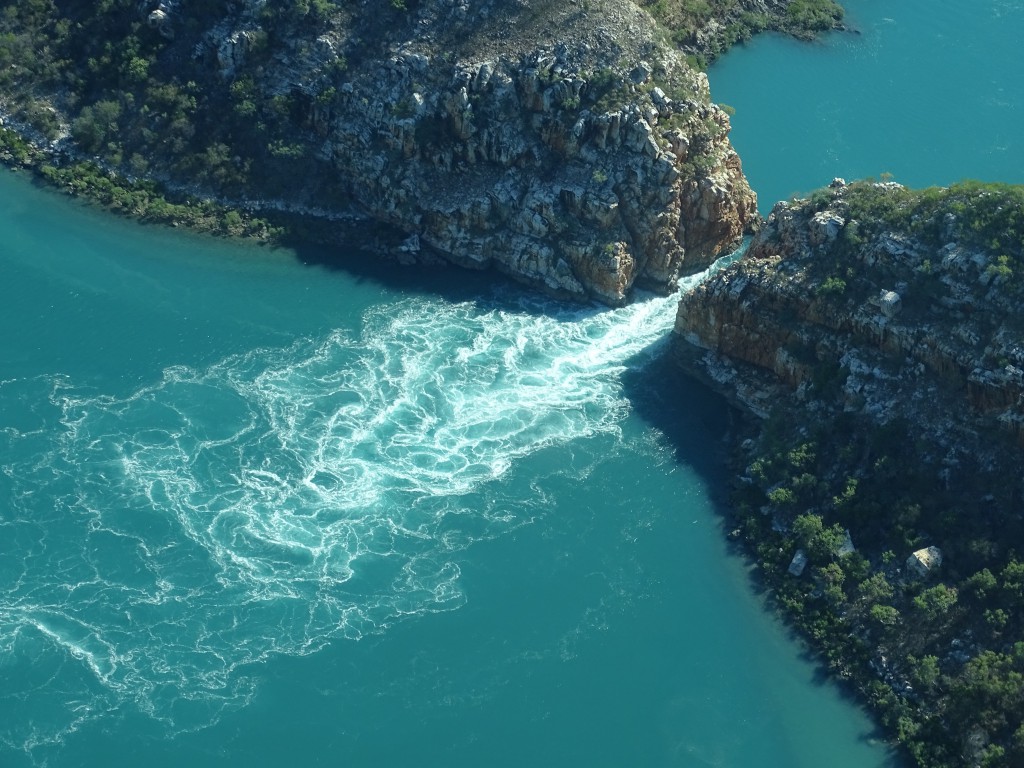 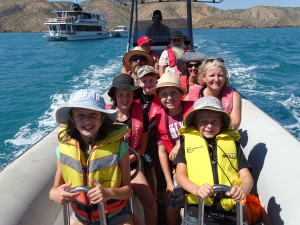 We flew in by seaplane because they are located right the top of the Kimberley (where there is nothing for a long way but spectacular azure sea, islands and empty beaches) landing at a pontoon in Talbot Bay and transferring to a luxury houseboat. From here, we were taken through the falls on a 900 hp boat, giving us not only a great view but a thrilling ride too! 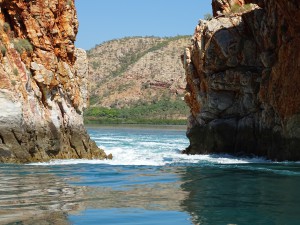 We met another lovely Aussie family, the Taylors, who instantly made friends with the boys and had amazing experience swimming in a shark cage, feeding chunks of fish to half a dozen large, hungry Tawny Nurse Sharks. Ollie was beside himself with excitement, as was Ben when they served grilled barramundi for lunch, and Cameron thought the whole day was just ‘amaaazing’ in his best Aussie accent. 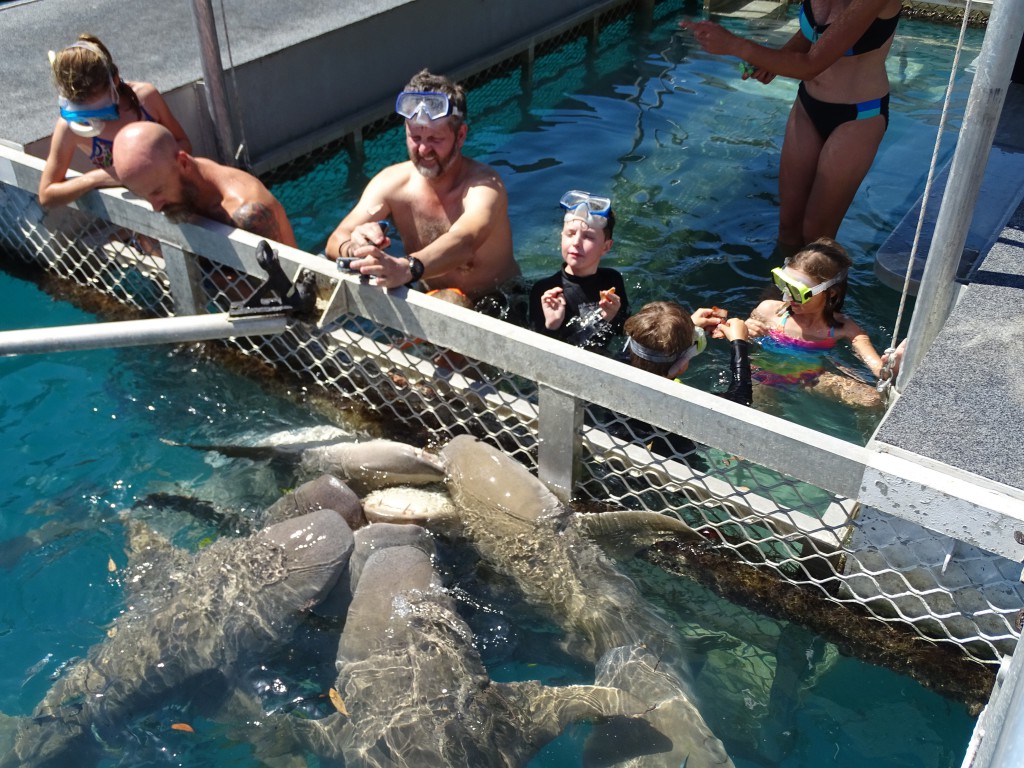 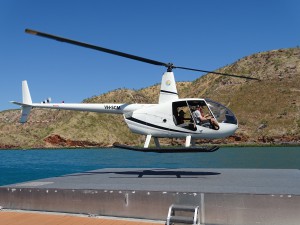 For both Ollie and I it was a ‘first’ as we took a helicopter ride over the falls, although I
have to admit to being a bit scared as the helicopter had no doors and nothing to hold on to. The pilot assured me we couldn’t fall out then seemed to do his best to test this theory with some impressive, but terrifying turns.  It was an incredible day though, and was worth the cost and effort.  This part of the WA coastline is just spectacular. 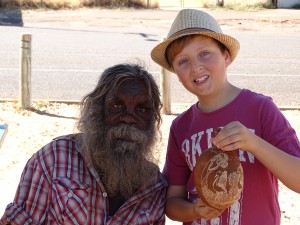 Before leaving Derby we did a bit of ‘art’ by visiting the Norval Art Gallery, run by a lovely family who promote their own art and that of local aboriginal artists in their fascinating shop/museum.  After being made very welcome by Mary, one of the owners who spent time discussing art appreciation with the kids, the boys decided to invest their birthday money from their Nan & Pop and bought a piece of Aboriginal Art each.  It’s never too early to start your own art collection we think!

Driving out of Derby we came across this impressive sight, kites and other birds of prey taking advantage of a small bushfire to prey on the animals fleeing the fire.  Some of these birds have even learned how to carry smouldering sticks from fires, dropping them into dry bush to create new fires and new hunting grounds.  Ingenious survival technique! 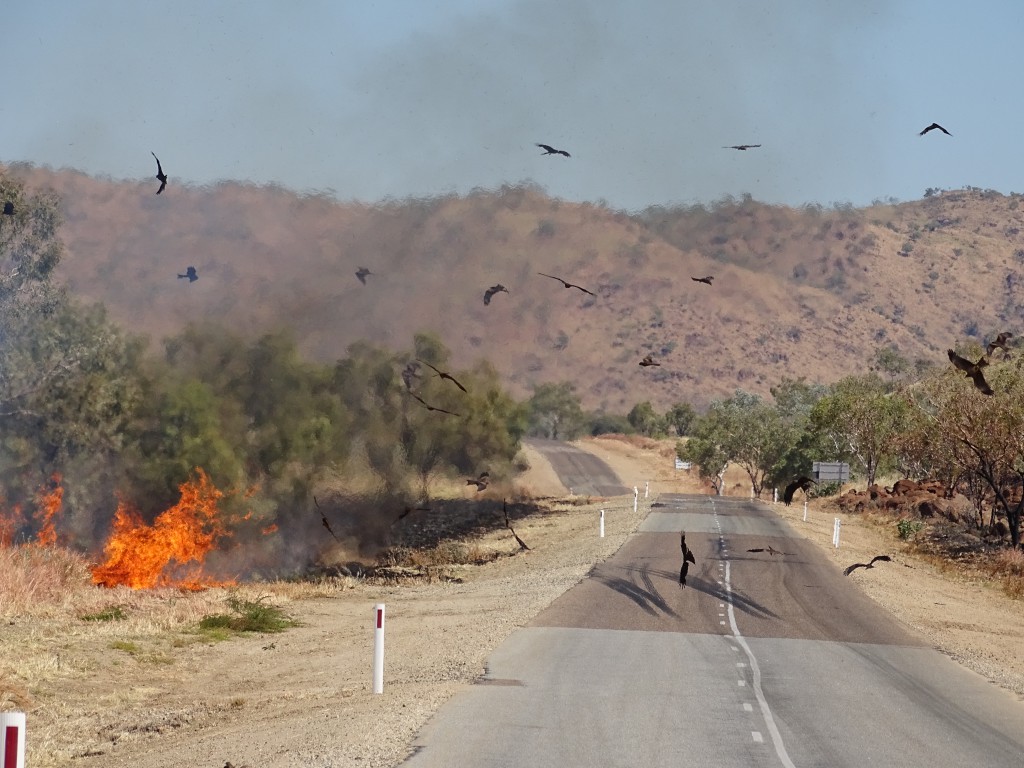 2 Responses to The Kimberley Western Australia